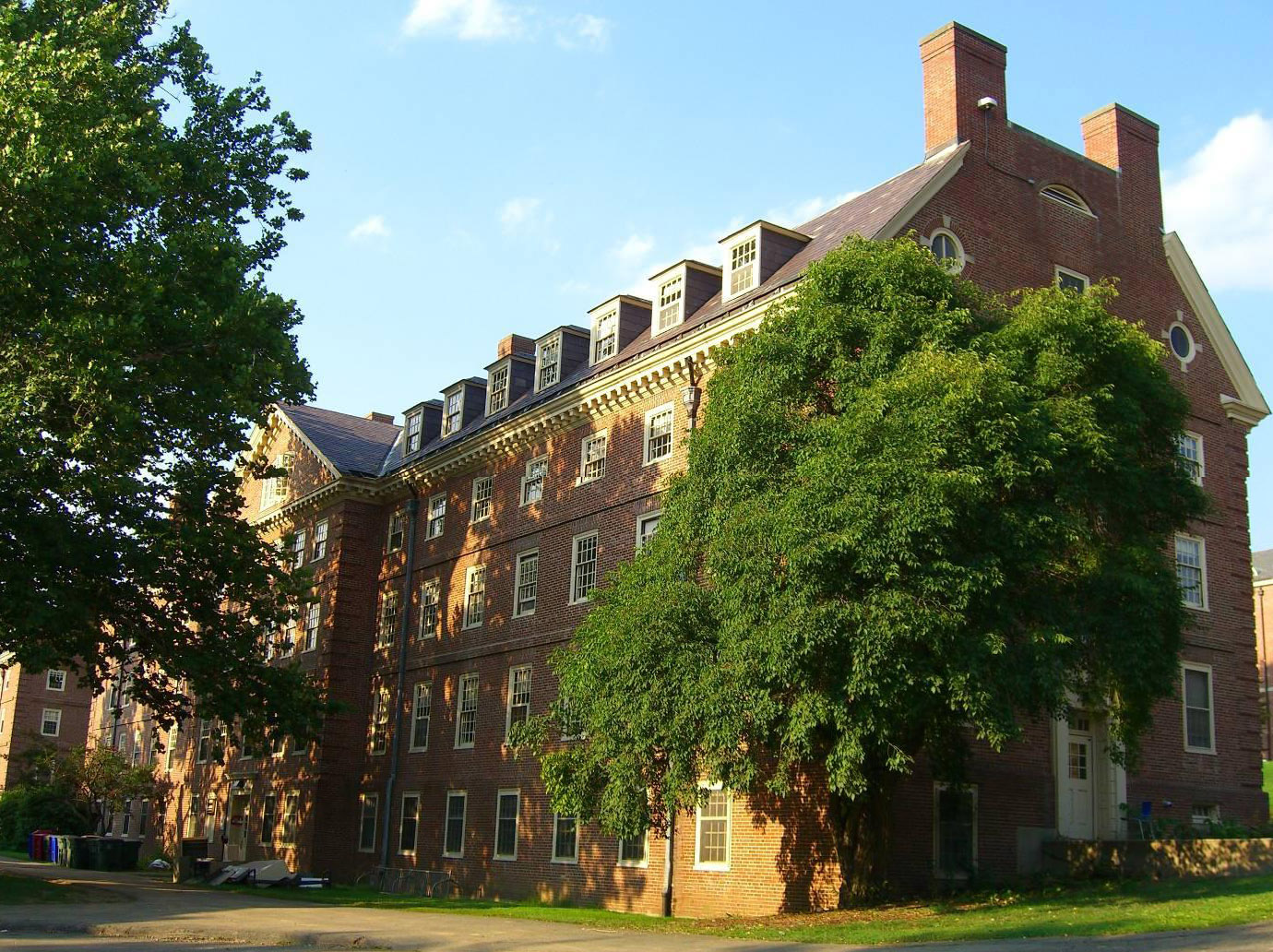 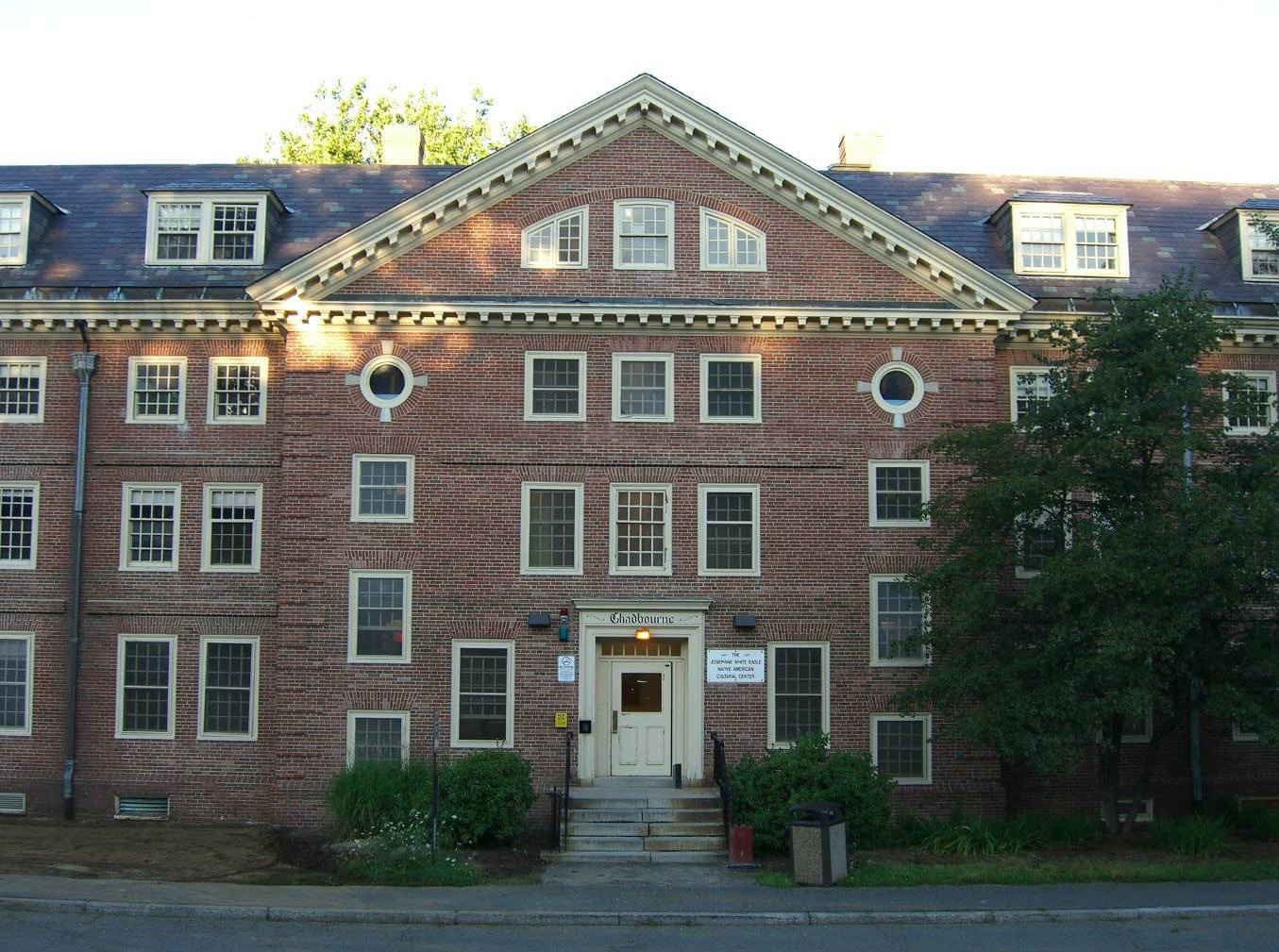 Chadbourne Hall is an approximately 37,000 square foot student residence hall on the Amherst campus of the University of Massachusetts. The building is one of nine structures that comprise the Central Residential Area. All nine buildings were designed and constructed between 1940 and 1963, and sited according to a Beaux-Arts formal plan.

Constructed in 1947, Chadbourne House’s completion followed Greenough and defined a full terrace within the Central Residential Area. Only one year separates the completion of Greenough from its mirror structure, Chadbourne House. The two structures are remarkably uniform in their Georgian Revival Style and share the same façade composition and refinement of details

The rectangular building is 3 ½ stories tall with a basement level exposed by change in grade at the west elevation. The structure is generally 13 bays wide by 3 bays deep. One central cross gable distinguishes the central 5 bays, which project substantially from the main building volume and visually divides the façade into three blocks. The roof eaves of the long elevations are accentuated by a wood dental cornice with returns at the gable ends.

Chadbourne House has a common-bond brick veneer with a molded brick projection to define the basement floor level. Decorative brickwork includes the use of quoins at north and south and to define the projection of the central cross gable. Brick banding also occurs at the floor levels. The façade includes a window pattern of primarily single-hung sash. The muntin patterns progress from the basement level 4/8 to the first floor 12/12, to the second floor 8/12, and finally 8/8 for both the third floor dormers at the mansard roof. The north and south elevations are distinguished by a large 16/16 window at the central bay to illuminate the inter-floor stair landings. This bay also divides the gable-end chimney blocks. Circular radial pane windows with keystones occur at the fourth floor level and first floor stair landing. A similar offset window pattern also occurs to accommodate the interior staircases at the cross gable on the east elevation. Building entrances are regularly located at the central bays of each elevation and feature decorative wood doorcases with paneled thresholds. Exterior granite stairs with wrought-iron railings occur at the east elevation.

Greenough House and Chadbourne House were constructed as a complex of two men’s dormitories to the north of Clark Hill Road at the intersection with President’s Hill Road (now Chancellor’s Way) in 1946 and 1947. A ca.1948-49 campus map shows the two buildings set in a wooded area accessed by a winding pedestrian walk adjacent to Clark Hill Road (extant). The area surrounding the buildings is no longer as densely forested as the c.1948-49 campus map implies. Historic images of the two buildings show upright evergreen shrubs framing the entrances along the eastern façade (extant, now mature at Greenough House; no longer extant at Chadbourne House).

Chadbourne House was named for former Massachusetts Agricultural College President Paul Ansel Chadbourne (1823-1883). Chadbourne had distinguished himself as a chemist on the faculty at Williams College and served one term in the State Senate, before being appointed the second president of MAC in 1866. Although he pressed an ambitious agenda for building a College from scratch, ill health forced him to resign only a year later. He returned to MAC after holding faculty positions in Wisconsin and at Williams, filling a second stint as president from 1882 until his death in 1883. Though brief, he set an important precedent by creating a “scientific and literary” track of study to complement the “agricultural and scientific” one, and by pushing for the financial support of poor students.