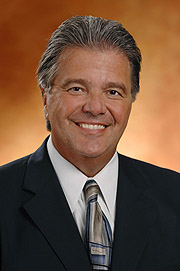 Robert L. Caret
Robert L. Caret was elected President of the five-campus, 68,000-student University of Massachusetts system on January 13, 2011. Ranked as the 19th best university in the world in the Times of London's 2011 World Reputation Rankings, UMass was established in 1863 and consists of the flagship campus in Amherst, along with campuses in Boston, Dartmouth, Lowell and Worcester.

President Caret, a native New Englander, assumes the presidency of the University of Massachusetts after completing highly successful presidencies at San Jose State University and Towson University. President Caret presided over periods of significant growth at both universities and gained nationally acclaim for eliminating race-based graduation disparities at Towson.

From 2003 to 2011, President Caret was president of Towson University where he also served as a faculty member, dean, executive vice president and provost during his more than 25-year tenure at the university. Between 1995 and 2003, he left Towson to assume the presidency of San Jose State University. Dr. Caret is credited with helping to reinvigorate both the Towson and San Jose State University campuses, and he championed a joint city/university effort to build the Martin Luther King, Jr. Library in San Jose.

Previously, he served on the NCAA Presidential Task Force on the Future of Intercollegiate Athletics and served on their Presidential Advisory Group and the Football Academic Working Group. He has also served on the American Flag Foundation Board of Directors the Board, the College Board Foundation, the Board of Directors for the American Association of State Colleges and Universities (AASCU), the Maryland Governor's Workforce Investment Board, and the Maryland P-20 Leadership Council. He was inducted into the Baltimore County Chamber Business Hall of Fame in 2006 and was awarded the Towson University Hillel Gesher Award in 2010. He was also awarded the Metropolitan Silicon Valley Chamber of Commerce Leadership Award in 1999.

President Caret has authored many articles in business and professional publications in the fields of chemistry, chemical education and higher education. He co-authored four textbooks in the fields of organic chemistry and allied health chemistry. The Maryland Chapter of the American Chemical Society recognized President Caret's achievements by honoring him with the George L. Braude Award in 2005.

The University of Massachusetts is the largest university in New England, with an enrollment of more than 68,000 students and graduating more than 13,000 students a year. UMass research expenditures exceed $500 million and the University has become a national leader in generating licensing income. UMass has spent $2 billion on campus construction and renovation over the past decade and its economic impact on the Commonwealth of Massachusetts is estimated at nearly $5 billion a year.