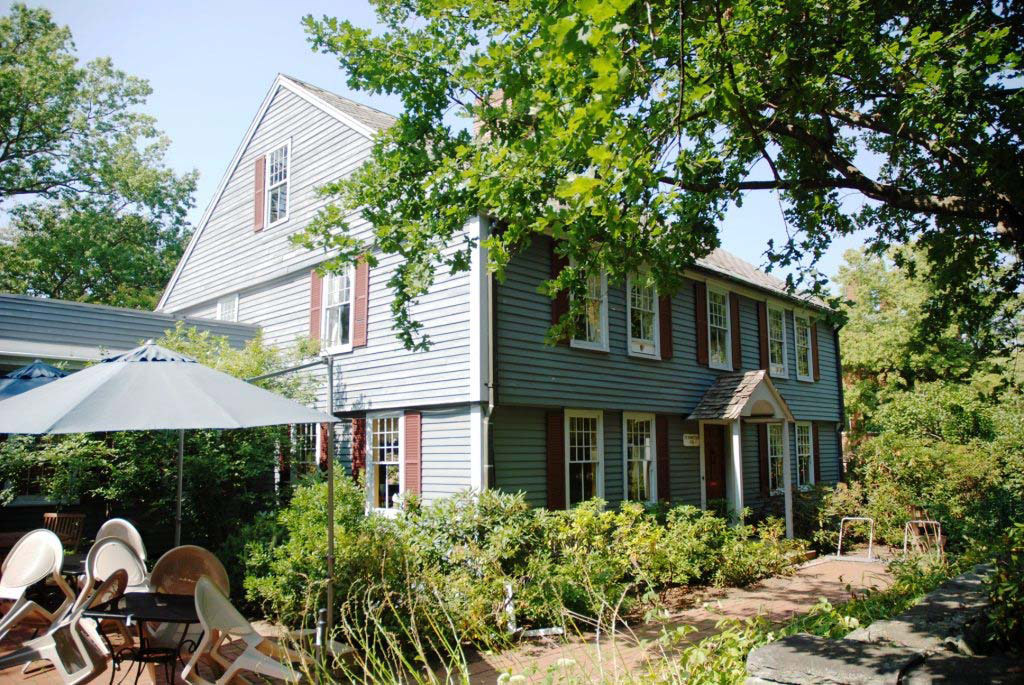 Homestead House is a 2½-story 18th century side gable wood frame structure with a garrison-style second floor overhang. The house is five bays wide and two bays deep, with a brick central chimney, concrete foundation, slate roof and clapboard siding. Thought to have been built circa 1730, the house originally was located where Building # 412 Lederle Graduate Research Tower (built 1972) now stands and was moved to its current location after its original site was cleared for the construction of Lederle.

Homestead House’s main entry is centered in its east elevation, within a shallow front porch that has a front gable and simple square porch posts. The porch has a round arched opening in its gable peak. Undated historic photographs on file at Special Collections and Archives, W.E.B Du Bois Library, University of Massachusetts Amherst show that the house had a wraparound porch with Italianate brackets in the early 20th century, while other photographs from about 1935 through 1945 show the current porch in place, both with and without lattice trelliswork. The entrance contains a six-panel single door. Two evenly spaced 12/2 windows are located at either side of the door. The second story has five 12/2 windows.

The building’s south elevation has two 12/2 windows at the east end of the first story, while this elevation’s west end is connected to a one-story clapboard structure known as Stockbridge House Addition (Building #509, built in 1973) that links Homestead House to Building #62 Stockbridge House on its south. The linked buildings serve as the University Club and the area between the buildings is a landscaped courtyard with brick paving. The second story of Homestead House’s south elevation has two evenly spaced 12/2 windows, the western one of which is partially hidden behind the Stockbridge House Addition’s clapboard parapet wall. Homestead House’s gable peak contains a central 12/2 window.

Although the Stockbridge House Addition is not very old, this structure’s design and materials have some consistency with the two 18th century houses that the Addition links. The Stockbridge House Addition is five bays wide, with a slightly projecting central nine-panel door and a 6/1 transom that are framed by fluted pilasters and a pediment. Two 12/12 windows are located to either side of the door. The roof is hidden behind the parapet wall.

Homestead House is located along the west side of Stockbridge Road to the north of Stockbridge House. On the west side of the site, the ground slopes gently to the west to a bituminous concrete parking lot located behind the house. Access to the house is provided by a brick pedestrian walk from Stockbridge Street. A bituminous concrete drive is located to the west of the house. Vegetation on the site consists primarily of deciduous and evergreen trees over lawn, high and low evergreen shrubs along the foundation of the building, and perennial planting. The site also features a stone wall between the house and Stockbridge Street.

In the 18th and 19th centuries, the descendants of John Cowles included soldiers in the Revolutionary War, a selectman and a treasurer for the town of Amherst, two physicians and a member of the original board of trustees for Amherst College. At the same time that Chester Cowles sold the Homestead property and farm to MAC in 1864 for $6,710, another member of the family, L.D. Cowles, sold Stockbridge House and approximately 114 acres of land to MAC for $14,950. Overall, the original purchase of land for the establishment of MAC included part or all of six farms and parcels totaling 310.55 acres.

The MAC used Homestead House as residential quarters for the farmer in charge of the Massachusetts State Agricultural Experiment Station until the autumn of 1929, when the building was renovated in Colonial-revival style to serve as a so-called Practice House for the College’s household economics program. Under this practice house program, successive groups of female students would live together in the house, under the guidance of a resident faculty member, in conditions that were intended to simulate the realities of family life on a moderate income. The students’ charge was to work on problems inherent to moderate income living and thereby become successful at running a household.

A 1929 newspaper article written for the dedication of the this new program in the renovated house notes that this educational experiment at the College was something that had been in place at every other state college in New England for upwards of 25 years. The article also opines that home economics is becoming an applied science and young people need to become trained in homemaking to meet the evolving demands of progressive modern life. The launch of the practice house facility in 1929 is consistent with the College’s overall programming direction following World War I, when the administration was cognizant that its core missions had to be expanded to meet the educational requirements of a rapidly industrializing world.

Homestead House was removed from its original foundation in 1968 to make way for the construction of Lederle Graduate Research Tower. It was only several years later in 1972 that Homestead House was relocated to its current address at 241 Stockbridge Road, where it continues to serve as part of the University Club.

Construction along Stockbridge Road began with Homestead House and Stockbridge House in 1867. Early historic images of Homestead House show the building set in open lawn with scattered deciduous and evergreen trees. A barn (no longer extant) was located nearby, and an arching unpaved access drive and residential-scale pedestrian circulation routes provided access to the house. Early images of Stockbridge House show the building set close to the road with lawn leading to the sidewalk and street, a specimen deciduous tree in the front yard, and a cluster of evergreen trees at the southern end of the building. Initially, the building’s foundation was bordered by lawn, but later historic photographs show a mixed foundation planting of evergreen and deciduous shrubs. New construction to connect and expand the buildings has changed the character of the site, resulting in reduced site associated with both of the buildings. New planting to screen a new bituminous concrete parking lot to the south of Stockbridge House has resulted in a dense landscape surrounding the buildings in contrast to the historic appearance of the buildings. New buildings construction, including all phases of the Morrill Science Center to the west, has changed the landscape context of the buildings.