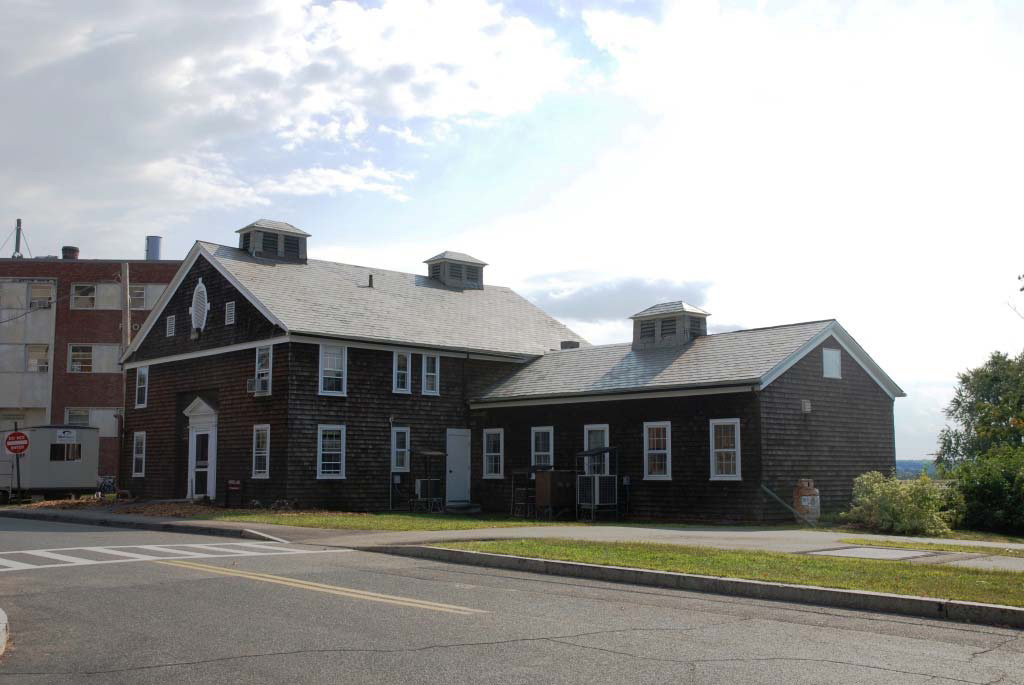 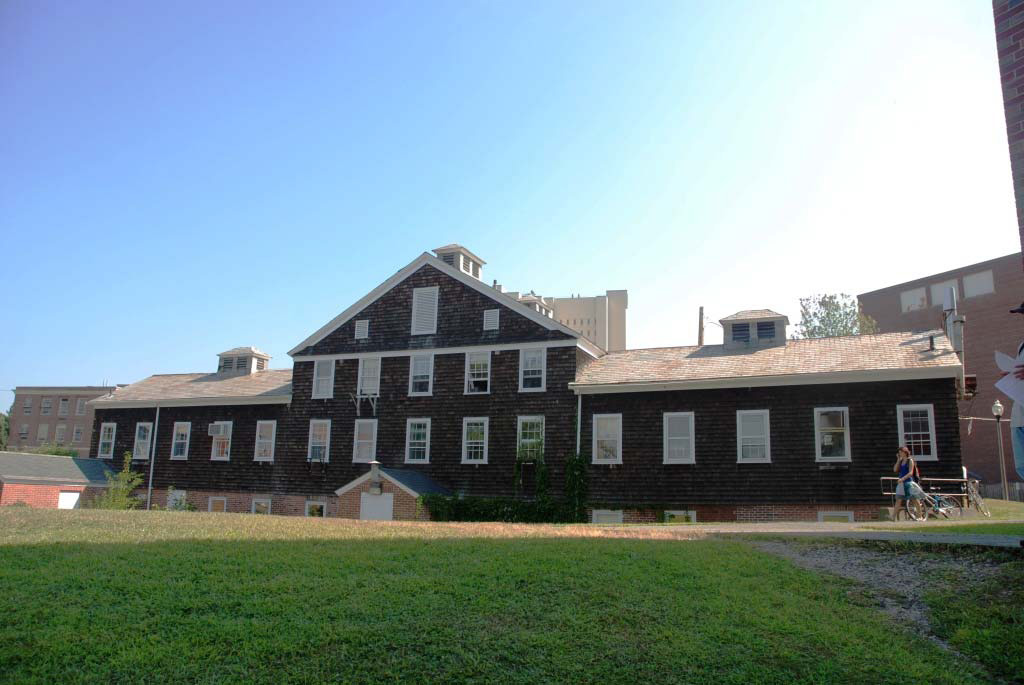 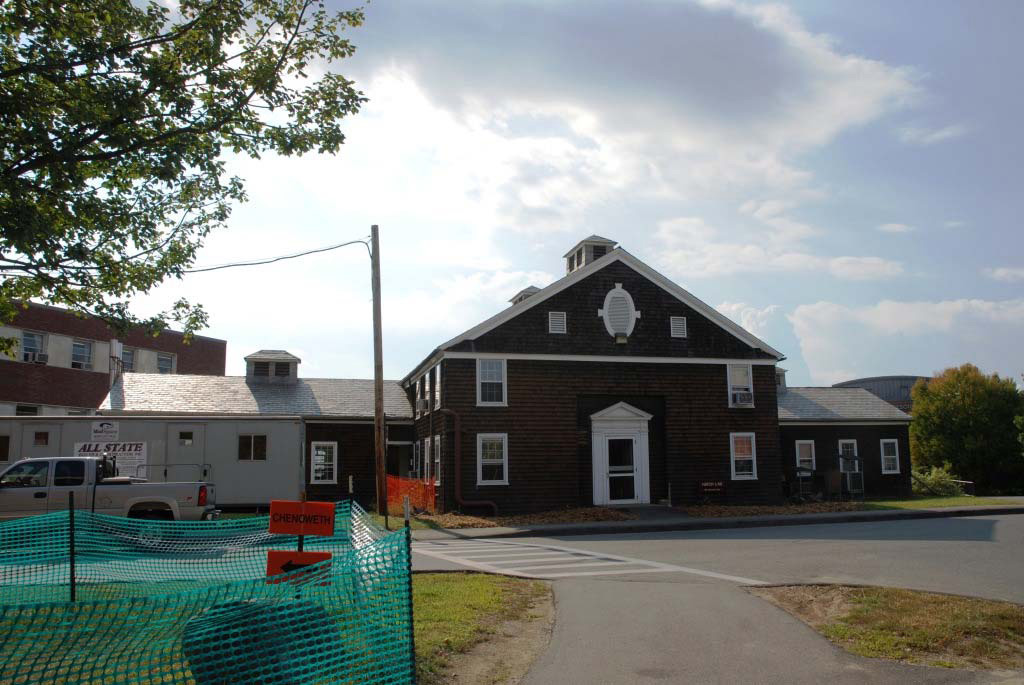 The original Hatch Experiment Station barn burned April 5, 1891, and a new barn was immediately begun upon an enlarged plan designed by Prof. Brooks.

The main entry is in the projecting front gable section of the east elevation. The central door is set within a Georgian Revival door frame that consists of fluted pilasters and a pediment with dentil molding. A 6/6 wood sash window is located to either side of the door, close to the corners of the front gable section. The second story of the front gable section has two 6/6 windows, which are vertically aligned with the first story windows. The gable peak contains a large central oval with louvers, which is flanked by small rectangular louvered panels. The oval has Federal keystone motifs at the top, bottom and sides of its frame. The east elevation’s one story north wing has four evenly spaced 6/6 windows. The east elevation’s south wing was partially hidden by a construction trailer in September 2008, but appeared to contain a door at either end, with two evenly spaced 6/6 windows between the doors.

Historic photographs on file at Special Collections and Archives, W.E.B Du Bois Library, University of Massachusetts Amherst include an undated photograph that shows the front gable section’s east elevation originally had a two-story barn door between the windows that remain in place today. This photograph also shows that the east elevation of the north wing originally had only one window, located at its center.

The south elevation has three 6/6 windows in both the first and second stories of the front gable section.

The west elevation has five evenly spaced 6/6 windows in the first and second stories of the front gable section, and five evenly spaced 6/6 windows in each of the one story wings. The gable peak of the front gable section contains a large rectangular louvered panel, which is flanked by small rectangular louvered panels. The west elevation has a one-story brick ell at basement level, which is located at the center of the elevation and contains a door to the basement. This single bay-wide ell has a front gable.

Hatch Laboratory is located to the northwest of Stockbridge Hall. Its main entrance is on the eastern façade bordering an access road from Campus Center Way. The building’s site slopes steeply from east to west. On the west side of the building, a bituminous concrete ramp connects the back entrance to a bituminous drive. The ramp has a steel railing. Vegetation on the north side of the building includes deciduous trees and shrubs in mown lawn. A row of bike racks is located along the walkway to the rear entrance.

By the early 1890s, the Trustees had determined that the ongoing growth of the Massachusetts Agricultural College as an institution meant that the campus would have to undergo a substantial reorganization in terms of land use. Additional dormitories and lectures halls were badly needed; the logical place for these buildings was within the core campus, where the College’s agricultural facilities were presently located; and the Trustees were quite aware that putting new residential and classroom buildings in close proximity of barnyards would be exceedingly undesirable for students and faculty. The farms would have to be relocated farther away from the core, not only for hygienic and esthetic reasons, but also for logistic reasons: the Trustees thought that the existing farm setup was becoming inconvenient from a farmer’s point of view. The Trustees were concerned that farmers would have to spend too much time and expense carting materials from fields to barns that had become (or would become) stranded among non-farm campus buildings. The challenge of relocating the farms was also regarded by the Trustees as an opportunity to create new, sanitary, model barns and veterinary laboratories where hard-to-eradicate problems like tuberculosis among livestock might be overcome. During this decade and into the 20th century, new state-of-the-art agricultural facilities were built, including the 1894 Horse Barn, Munson Hall and Munson Hall Annex.

West Experiment Station, East Experiment Station, Draper Hall, Flint Laboratory, Stockbridge Hall, and Goessmann Laboratory were constructed between 1885 and 1922 along the north side of Olmsted Road. Although oriented in an irregular pattern today, historically, the buildings were organized along the northern portion of what used to be Olmsted Road, later Ellis Drive. Historically, Olmsted Road was a street-tree lined road that curved around the west side of the pond, connecting to North Pleasant Street at both its northern and southern ends. Olmsted Road was removed between 1959 and 1973.

To the southwest of the complex were Flint Road (now Campus Center Way) and a ravine that ran to the south of what is now Campus Center Way, draining the Campus Pond. The area to the southeast of the complex was historically open lawn leading to the Campus Pond with a few scattered deciduous trees and desire-line paths. A pedestrian walk led through the open lawn, connecting Draper Hall to the intersection of the cross-campus walk and North Pleasant Street. This walk is no longer extant, obstructed by the construction of the Lincoln Campus Center. The construction of Hasbrouck Laboratory (1950) and addition (1963), Student Center (1957), and Lincoln Campus Center (1970) destroyed the visual connection between the Olmsted Road buildings and the Campus Pond.

This structure is named for U.S. Representative William Hatch, who was behind the Hatch Act of 1887. This Act enabled State agricultural experiment stations to receive funding from the Federal government.