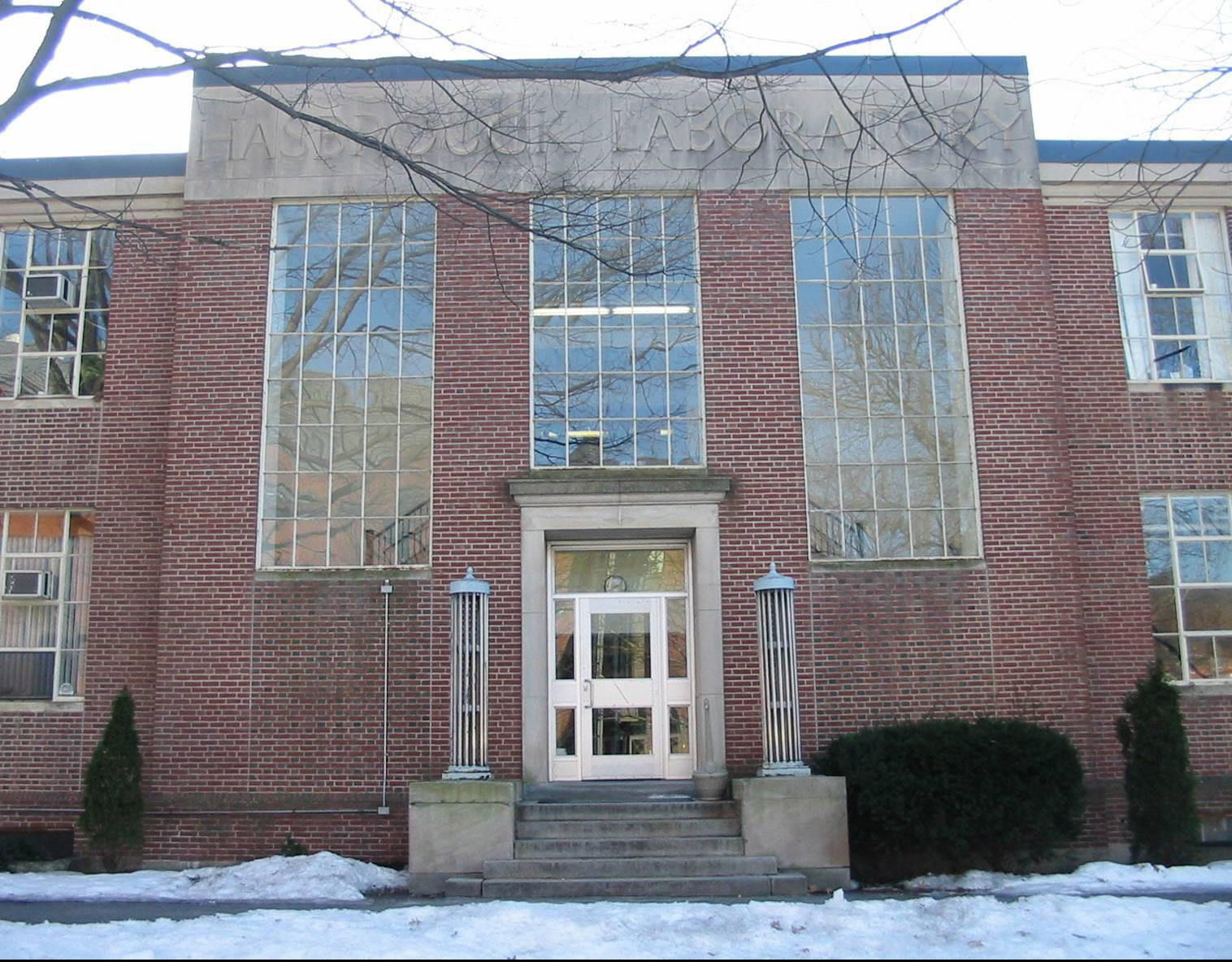 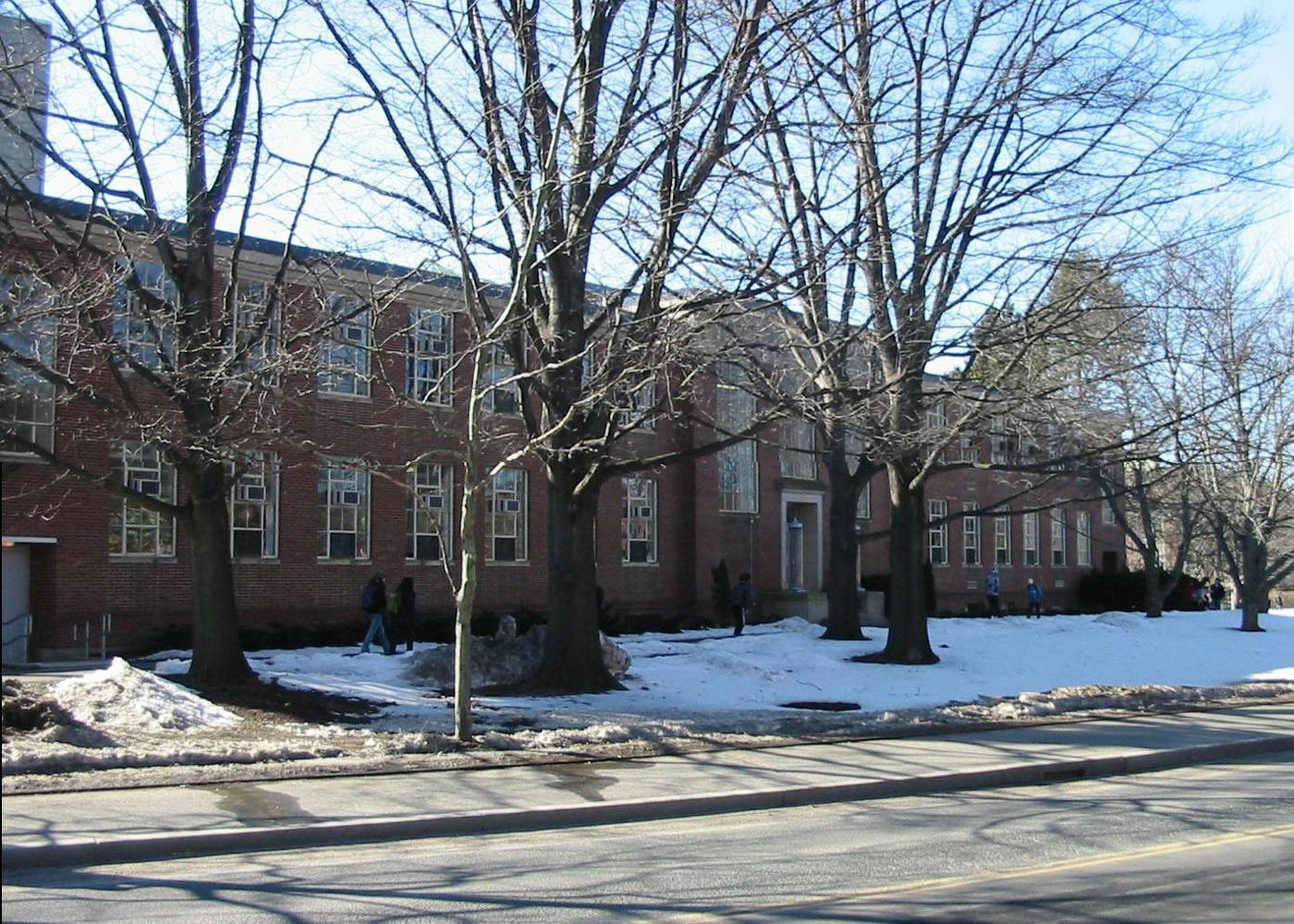 Hasbrouck Laboratory is located on the west side of North Pleasant Street and is oriented on a north-south axis with the eastern façade being the street facade. It is a two-story flat-roofed brick building with wings extending out from a three bay wide projecting entry. The brickwork is laid in a common bond pattern with 6th course Flemish headers and includes an ogee shaped brick water table that extends across the eastern façade at the level of the first floor. Brick continues below the water table to grade with small areas of exposed concrete foundation visible.

The central entry has Art Deco detailing and is characterized by a flush limestone frieze with the words “Hasbrouck Laboratory” inscribed. Two large five light wide by eight pane high steel windows flank the main entrance with a five light wide by six pane high steel window is located above the entrance. Each of the windows has a limestone sill. The area below the side windows has decorative brickwork set in a Flemish bond from the sill to the brick water table.

The main entry doors are modern aluminum replacement doors with transom and sidelights set into the original limestone architrave. The entry is six steps above grade with a granite landing and steps flanked by limestone cheek walls. At the front corner of each cheek wall is an original aluminum lighting fixture resembling fasces.

At the southern end of the south wing and the northern end of the north wing there are painted flush hollow metal-exit doors leading from fire stairs within. Above each door is a large four pane wide by six pane high steel window with the lowest two panes acting as a ventilator window. From there to the center three-bay entry are seven four pane wide by four pane high steel windows at both the first and second floor levels. Each window has three operable awning sash which incorporate the center two panes of the window. The uppermost pair is not operable. Located vertically between the water table and the first floor windows, and between the first and second floor windows, there is a decorative Flemish bond panel of brickwork. There is a limestone coping at the top of the walls.

There are several louvers at the basement level on the eastern façade which have concrete areaways.

On the north façade there is a single window at the center of the first and second floor levels and a center entry door with a window to its west at the basement level.

At the rear, or western façade, the building is symmetrical about a large three-story round tower which is half engaged into the plan. The tower is surmounted by a copper sloped octagonal roof. The tower projects above the flat roof of the rest of the building. The space within the tower contains a library and lecture room. It has glass block windows in the clerestory area above the adjacent roof and six-pane wide by four- pane high steel windows at the second floor level. There are no windows in the tower at the first floor level. There are four-pane wide by four-pane high steel windows at the basement level of the tower.

Flanking the center tower on the western façade the north and south wings each have seven bays of steel windows at the basement, first and second floor levels. There are exit doors located in the bay closest to the tower at the basement level. These windows are identical to those on the eastern façade except that the windows above the basement exit ways are six panes wide by four panes high.

Hasbrouck Laboratory was constructed in 1950 and was the first major structure to be built within the campus center- then known as the “central park” – bounded by Stockbridge Road on the east and Ellis (Olmsted) Drive on the west. The site was located along North Pleasant and adjacent to the concentration of buildings extending west from Goessmann Laboratory. Ultimately, construction at this site represented a shift in the policy of the institution’s Campus Planning Committee, first established in 1932 by President Thatcher. The principle of an inner zone of “general use” buildings had been followed since the early 1900s, however, the central lowlands of this development had been cultivated as a pastoral landscape. Although records of the site selection process have not been located, it may be assumed that the choice of a prominent and preserved open space was intended to showcase the institution’s scientific advancement.

Hasbrouck may be considered the first significant modern structure on the institution’s campus. Although there are virtually no distinctions in the building’s construction technology from other projects of the period (concrete and steel frame) the exterior form was a clear departure from the Georgian Revival style influencing the dormitory construction. Such a distinction was not uncommon to this period of post-WWII campus architecture, when science facilities often embraced the symbolic connotations of modern design, while residential construction adopted the historic.

Despite the building’s potentially intrusive location on the landscape, the original surroundings were incorporated into the design. The front façade was rectangular in composition and reinforced the North Pleasant Street corridor and historic elm allée. However, the central block of the west elevation is a half circle in plan, with nearly continuous windows at the upper levels to offer unmatched panoramas of the central park. An elevated rear terrace and retaining wall (no longer extant) also offered an immediate exterior overlook for the pond landscape.

The older section of the building was designed by William Roger Greeley (of Kilham, Hopkins, Greeley, and Brodie) to blend into Skinner Hall and the other brick neo-Georgian buildings of the period, and features a then-novel circular classroom.