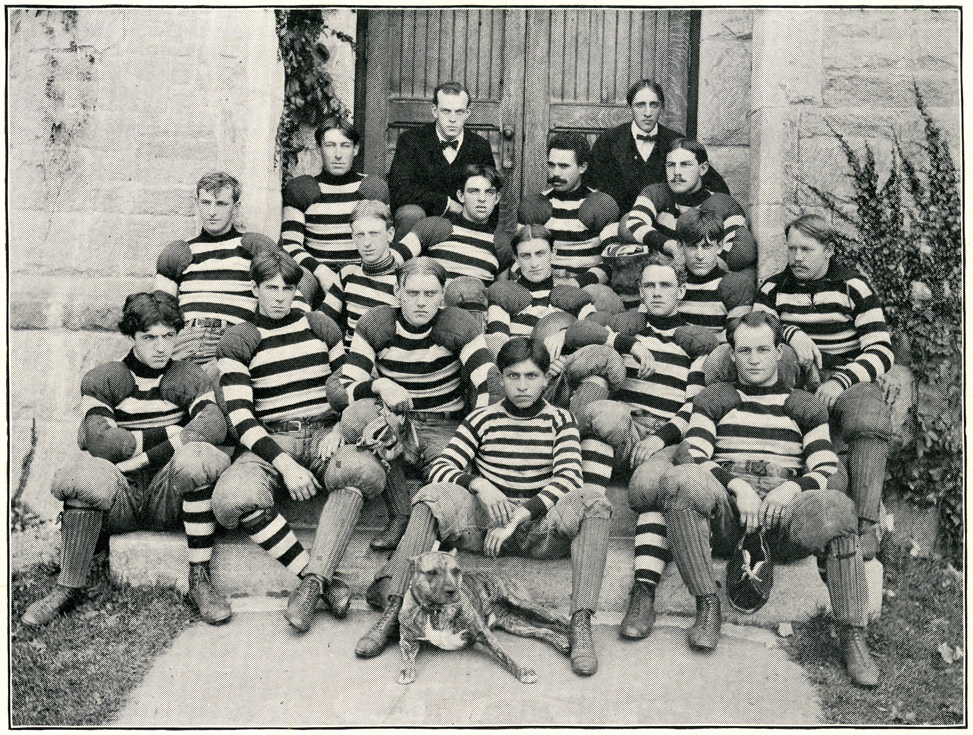 Football team, 1901 (Bridgeforth in center rear)
The first African American student to enroll at the Massachusetts Agricultural College was probably George Ruffin Bridgeforth (sometimes listed as George Ruffum Bridgeforth), who arrived in Amherst in the fall of 1897. Born in Athens (Limestone County), Ala., on Oct. 5, 1873, Bridgeforth was nearly 24 when he entered as a freshman, and in some ways, he set a pattern for the pioneering cohort of African American students at MAC. Older than the average student and southern in origin, he had studied at an historically Black college (Talladega) prior to his arrival. Just as important, once he arrived, he became an active participant in the athletic and academic life of his new college.(1)

From his freshman year, Bridgeforth dove into the full range of student activities and he appears to have been popular with his classmates. Selected as Sergeant at Arms for the Sophomore class, he was a valued part of the rope pull team and the College Shakespearean Club, addressed the Amherst Grange on the “Agriculture of the south,” and he was a Corporal in Co. A of the Cadet Battalion and President of the YMCA. Academically, he was awarded second Prize in the Flint Oratorical competition as a junior in 1900. The “orator of the South,” as the Index (the student yearbook) reported met his “crowning success in the oratorical line” when defending “against the slanderous accusation of being false to his class. This great orator not only defended his honor on the chapel stage and gained the unanimous decision of the judges, but at the same time accomplished the difficult feat of breaking up a Y.M.C.A. meeting” (2). Like many of the early African American students at M.A.C., Bridgeforth also joined the football team, playing center (1899) and right guard (1900) and earning the then-coveted right to wear a college sweater, cap, and letter (3).

Success in so many endeavors aside, Bridgeforth faced challenges in his schooling. After his first term at MAC, on January 4, 1898, he was forced to join an Armenian student, Dickran B. Tasjian, in petitioning the College Board of Trustees for relief from tuition and fees because of inability to pay them“ (4). The petition was granted. Although it is uncertain how Bridgeforth coped thereafter, there are clues. In the U.S. census for 1900, he was one of four lodgers (the others white) listed as living at the home of Louisa S. Baker, just off the south end of campus at 101 E. Pleasant Street. Baker was no ordinary town resident. Known for many years as a good “Friend of the College,” Mrs. Baker came from a family that had owned part of the land on which MAC was established, and she lived virtually at the gate of the college until her death in 1908. The writer of Baker's obituary lauded her philanthropy to the poor of New York City and the “colored people of the south,” but took equal pains to point out her quiet work with MAC students:

"she delighted in acting a mother's part toward boys who came to college determined to pay their own bills so far as possible. She opened her house to such and always had one or more occupying rooms under her roof. She gave them employment and looked sharply after their conduct and habits... The number of 'Aggie' boys whom she has helped in one way or another us unknown to any except those who knew her well. Many of them she helped financially to secure their education at M.A.C. She advanced them money to complete thir professional studies in universities and in some cases welcomed their sons when they, too, came to their father's college." (5)

In her will, Baker left $6000 to support “poor, industrious and deserving” students.”

At points during his tenure at the College, Bridgeforth's health also became a concern: he survived measles one winter, but more seriously, he nearly blew himself up. While working in a field near Hatch barn during his sophomore year, Bridgeforth accidentally ignited a stick of dynamite in his face, causing him to lose five teeth, sustaining cuts across his face, and injuring both eyes. Thankfully, quick medical care enabled him to recover his eyesight within weeks (6).

Like most of the first generation of African American students at Mass Aggie, Bridgeforth pursued a career in education at historically Black colleges. His first stop on the way was at the State Normal School in Atlanta, Ga., but by 1902, he landed a position with the Agricultural Department at Tuskegee College, home to two of the most prominent leaders in African American education of the day, Booker T. Washington and George Washington Carver.

Described by historian Linda McMurry as “a big, energetic, blustery man with a flair and a taste for administrative power,” and the “temperamental opposite” of Carver, Bridgeforth was ambitious in his attempts to climb the ladder at Tuskegee. He was successful, too, but unfortunately, this success exacerbated the personality clash with Carver to result in a famously bitter and protracted feud. In the beginning, Carver had reporterdly advised against hiring Bridgeforth (as barn manager), and Bridgeforth responded by resisting Carver's authority wherever he could. After Bridgeforth was put in charge of the “Jesup Agricultural Wagon for Better Farming” in 1906 – an adventurous experiment in agricultural extension – and particularly after he was promoted to Director of Agricultural Operations at the College in about 1907, friction with the milder-mannered Carver peaked. Things eventually became so bad so that their work responsibilities had to be completely separated: while Bridgeforth continued as Director of Agriculture, Carver was assigned oversight of the research and Experiment Station.(7)

Even this arrangement failed to quell the conflict, Bridgeforth ultimately left Tuskegee after Washington's death (probably not coincidentally) and in May 1918, accepted a position as President of the Kansas Industrial and Educational Institute in Topeka. During his seven years at “the Western Tuskegee,” he established a hospital and nursing school, but by the mid-1920s, he returned home to Athens to work in various capacities, including teaching school, dairying, selling real estate, and teaching at Tennessee Agricultural and Industrial College in Nashville (8).

In some ways, Bridgeforth's return home signaled a renewed commitment to pursuing racial uplift. During his time at Tuskegee, if not before, Bridgeforth had developed a keen philosophy of community rooted in independent Black land ownership. To achieve this goal, he, along with several relatives and associates from Tuskegee formed the Southern Small Farm Land Company in 1910, and by working cooperatively, they soon established themselves as the only Black landowners in Limestone County. As the Company grew, it expanded scope to assist landless tenant farmers in acquiring their own adjacent property, which in turn led to the establishment of an all-black community of landholders they called Beulahland. Although a few community members were uprooted by the Tennessee Valley Authority in the 1930s to make way for the Wheeler Dam Reservoir, Beulahland was a success and many of the descendants of the original residents still remain on land acquired by their families in the 1920s. Always energetic, Bridgeforth lived out his conviction that land ownership alone would not bring about full equality: he was one of the first African Americans in the county to register to vote (9).