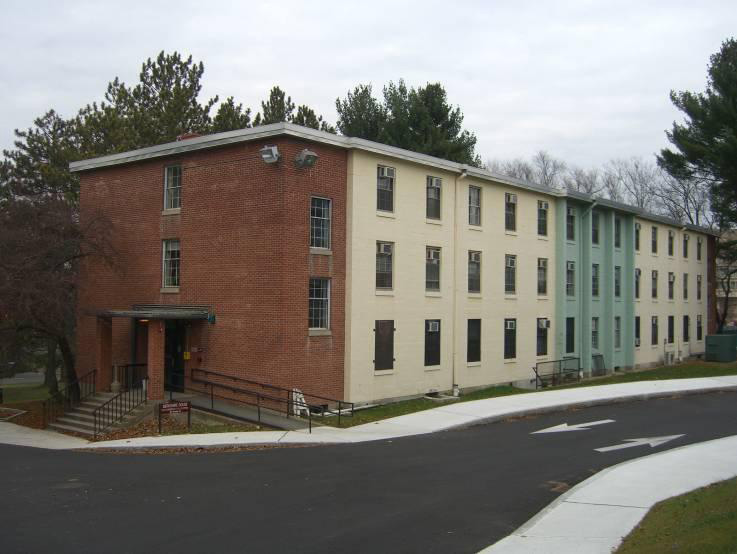 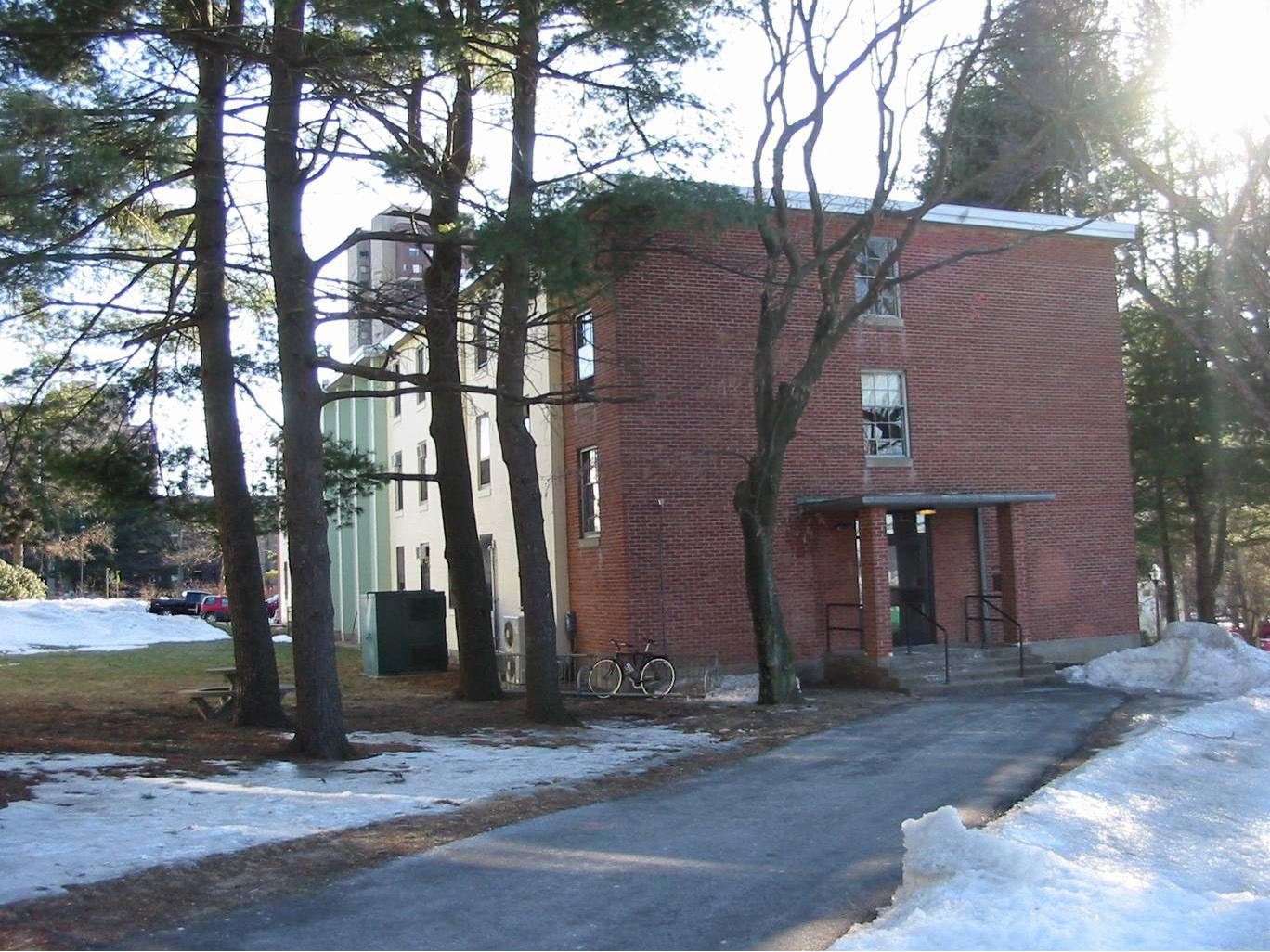 Berkshire House is one of five original concrete-block, multi-story residential structures designed to accommodate 150 persons or 30 families each. Berkshire House is one of three of the original buildings remaining of this group known as “county circle” ( Hampshire, Middlesex, and Berkshire). Plymouth and Suffolk Houses, which were also part of this group and located to the north of the remaining three, were demolished in the late 1960s.

Berkshire House is a three-story concrete frame building with full basement and a flat roof. The building is oriented along a north-south axis with apartments located on the east and west sides of a central corridor.

The building entries are located on the north and south ends of the building. Both entries have a painted flush hollow metal door and sidelight set in a hollow metal frame. The entries are at the first floor level and are protected with a flat canopy roof supported by two brick piers. The canopy roofs have a painted stucco finish on the underside. Both entries have a concrete stair and landing with a painted metal handrail. The south entry also has a concrete access ramp which is not original.

The north and south facades are approximately 28-feet high by 33-feet wide and have a brick masonry veneer set in a running bond pattern. Centered on both of the facades is the building entry at the first floor, a six-over-nine pane wood double-hung window with aluminum triple-track storm/screen combination at the second floor level, and a similar six-over-six pane window with storm/screen combination at the third floor level.

The east and west facades of the building continue the brick veneer of the north and south facades approximately 8-feet in from the ends of the building. The central section of the east and west facades projects approximately 12” from the brick and is thirteen bays wide with the center three bays accentuated by four engaged concrete block pilasters. The concrete block facades are painted. Each bay has a six-over-nine pane wood double-hung window with aluminum triple-track storm/screen combination at the first and second floor levels, and a similar six-over-six pane window with storm/screen combination at the third floor level. Each window in the concrete block portion of the façade has a flush painted bond beam lintel and a pre-cast concrete sill. Windows in the brick portion of the façade have steel lintels and limestone sills. Basement windows have window wells.

The flat concrete roof deck cantilevers approximately sixteen inches to form an overhang and drip edge. The underside of the overhang remains unpainted and the face of the roof deck has an aluminum fascia with integral drip edge. The overhang projects out beyond the engaged pilasters that form the center three bays of the east and west facades. There are three surfacemounted down spouts at both the north and south facades which are connected to cast-iron storm water collectors at grade.

Berkshire House, Hampshire House, and Middlesex House were originally constructed in 1948 as part of a complex of five buildings at the southern end of the campus. The area was formerly occupied by the R.O.T.C. riding grounds.

The building designs reflected the immediacy of their construction following WWII. Unlike the other campus dormitory construction, which was characterized by a thorough attention to historic style or architectural details, these buildings were simply finished with the standard building materials of concrete masonry-units and machine-made brick. Although the buildings were of solid construction, their entrances, windows, and rooflines were unadorned. The rectangular facades received only subtle details such as CMU pilasters and bays of brick veneer.

The expansion and realignment of Massachusetts Avenue removed the complex’s original vehicular access, and a small parking area located to the west of the buildings was replaced by the larger parking fields to the east. Vegetation surrounding the buildings has historically consisted of deciduous and evergreen trees over mown lawn with no foundation planting.

The structures were subsequently named for the Massachusetts counties Berkshire, Hampshire, Middlesex, Plymouth, and Suffolk. Plymouth and Suffolk Houses were demolished in the late 1960s after the demand for housing was offset by the development of Southwest Residential Area. The demolitions also allowed construction of Garber Field behind the Boyden Gymnasium.