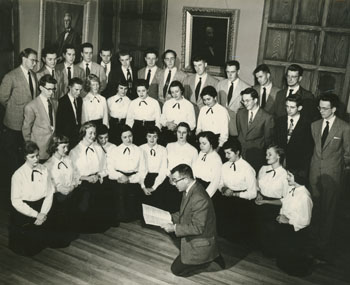 In 1871, the year of the first graduating class, students at the Massachusetts Agricultural College put on their first public vocal performance. On April 12, 1871, the Glee Club and Orchestra performed 18 pieces, accompanied by Professor W. H. Clarke on piano.[1] A popular activity among the college men, the Glee Club and spin off groups such as the Arion Male Quartette (ca.1890)

The arrival of Doric Alviani (1913-1996) in September 1938 as the first (and at the time, only) Instructor of Music in the new Department of Fine Arts, brought a new vigor to the musical and vocal scene at Massachusetts State College. Alviani began staging Gilbert and Sullivan operettas, beginning with the Mikado in 1939, with Fletcher Prouty (class of 1941) and Betty Moulton (1942) in the lead roles of Nanki Poo and Yum Yum.[2] Gilbert and Sullivan operettas were performed at least annually for many years, leavened by occasional shows by Victor Herbert and Cole Porter, among others.

By 1956, when Alviani was appointed the first Chair of the newly formed Department of Music, there were 14 music organizations on campus, including vocal, instrumental, and theatrical groups. In the 1930s, these included men's and women's Glee Clubs and the Statettes (for women) and Statesmen (for men), performing frequently throughout the Pioneer Valley and as far away as Boston and Stockbridge. Other groups had more modest aims: the Harmonaires was formed in the mid-1950s “to fill a constructive recreational need for frosh women.” The College Choir, the University Singers, the Concert Band, Pan-Hellenic Choir, Symphony Signers, and

The MSC Glee Club released a collection of 78 rpm recordings in the late 1930s.