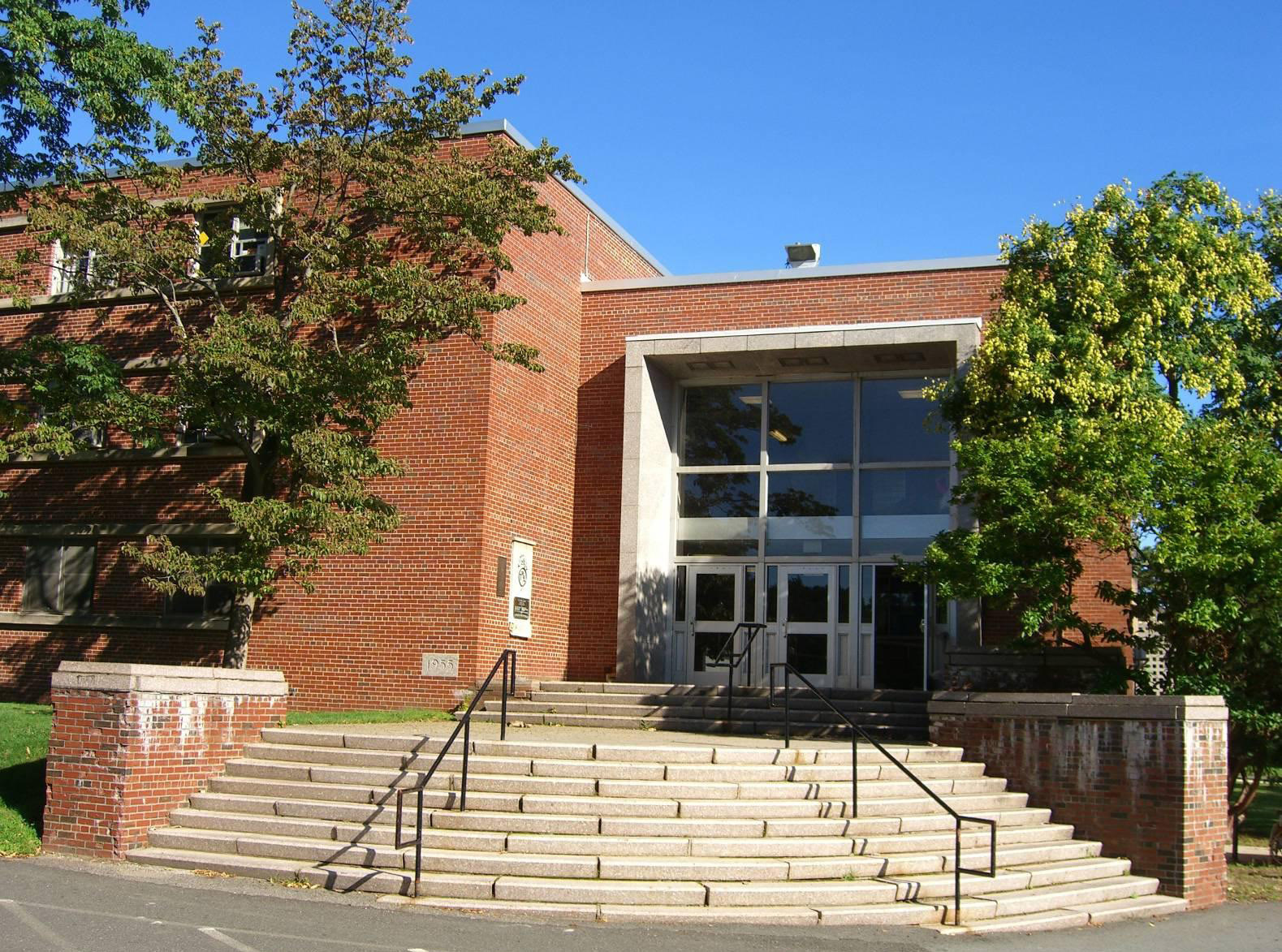 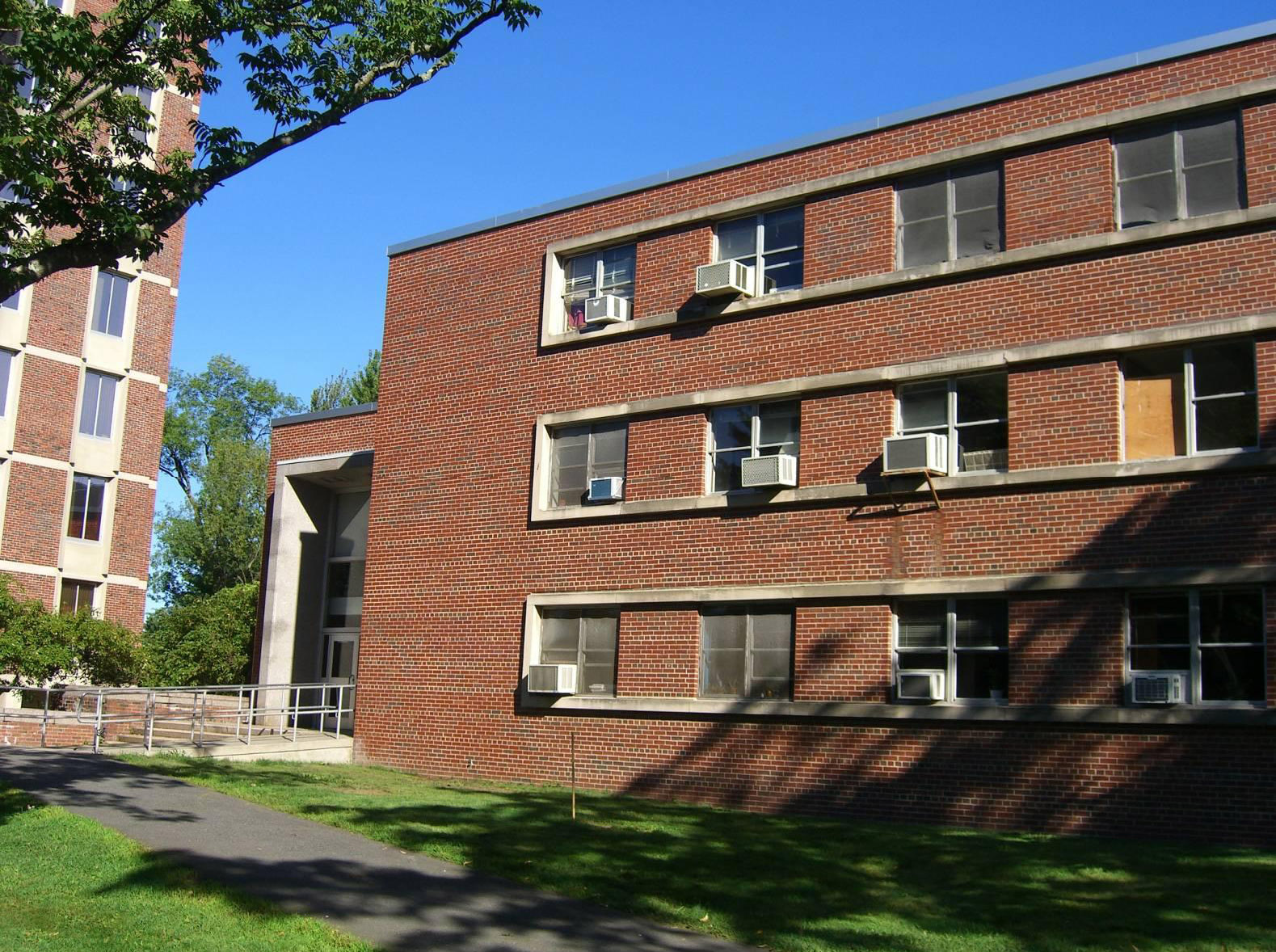 Machmer Hall is an approximately 73,000 square foot academic building on the Amherst campus of the University of Massachusetts. The building is located within the central campus and was originally designed to house the mathematics department.

The building has a c-shaped plan including a three-story central block and two two-story wings, all with basement. The building was originally sited facing the historic North College building with its primary façade as the south elevation. The flanking wings form a rear courtyard at the north, which originally faced the campus ravine prior to its infill for the parking structure.

The modern classroom building was constructed with a steel and concrete frame with interior partitions of structural-glazed tile. The three classroom blocks are each organized by double-loaded corridors. The rectilinear volumes of the building have flat roofs, continuous coping, and unadorned facades finished with common-bond brick veneer . The façade is unified through the spacing and composition of windows within a continuous frame of limestone window heads and sills. Windows are large doublehung 1/1 aluminum sash.

Two prominent entrance vestibules are located at the east and west ends of the south elevation. They are positioned at the joint of each wing feature double-height atriums with storefront glass walls and projecting, polished granite surrounds. Each vestibule has three pairs of tempered glass doors with aluminum frames.

The building entrances occur at a raised terrace elevation that is accessed via two exterior stairs. A large semi-circular stone staircase at the east is framed by brick retaining walls and originally provided linkage to the Olmsted Drive. The stair is now divided by metal handrails and leads to a small paved area for service vehicles. Two original exterior flagpoles are also prominent features of the south elevation.

Machmer Hall was constructed at the northern terminus of the Lincoln Road axis in 1957. The building was sited adjacent to the 19th-century North College building which survived for a few years before ultimate demolition. The location mirrored the Student Union across Olmsted Drive, which was sited to provide convenient access to both the male and female residential complexes. Although designed by separate architects, both buildings employed similar architectural details and contributed towards defining the central campus academic conference.

Following the completion of Hasbrouck Hall in 1950, the University adopted a modern approach to the design of all new academic buildings. Although there were virtually no distinctions in the building’s construction technology from other projects of the period (concrete and steel frame) the exterior form was a clear departure from the Georgian Revival style influencing the dormitory construction. Such a distinction was not uncommon to this period of post-WWII campus architecture, when academic facilities often embraced the symbolic connotations of modern design, while residential construction adopted the historic.

The southern end of the Lincoln Road axis was later terminated by the construction of Whitmore Hall in 1967. Historically, Lincoln Avenue was tree-lined and featured some open lots interspersed with athletic fields. New construction near Machmer Hall has changed the scale of the surrounding landscape. New construction includes W.E.B. Du Bois Library (1972) to southeast, Thompson Hall to the west (1968), and the Parking Garage to north (1970). Vegetation historically associated with the building, including trees over lawn and evergreen shrubs at the eastern entrance steps, remains intact.

Machmer Hall was named for William Lawson Machmer (1899-1953), who held one of the longest tenures of any administrator in the history of the University of Massachusetts. Machmer served under five presidents across 42 years, helping to guide the university through an economic depression, two world wars, and three name changes. During his years as Dean, Machmer witnessed the growth of the university from fewer than 500 students to almost 3,800, and helped guide its transformation from a small agricultural college into Massachusetts State College (1931) and finally into the University of Massachusetts (1947).