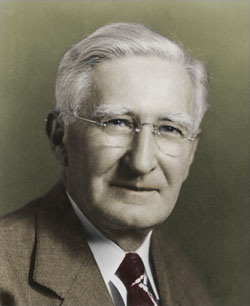 Enjoying one of the longest tenures of any administrator in the history of the University of Massachusetts, William Lawson Machmer served under five presidents across 42 years, helping to guide the university through an economic depression, two world wars, and three name changes. During his years as Dean, Machmer witnessed the growth of the university from fewer than 500 students to almost 3,800, and helped guide its transformation from a small agricultural college into Massachusetts State College (1931) and finally into the University of Massachusetts (1947).

Born in Moselem, Pa., on January 30, 1883, Machmer was trained as a teacher at Keystone State Normal School before receiving both his bachelors and masters degrees in languages (Latin and Greek) from Franklin and Marshall College. Having gained experience teaching for several years in the public school system in Pennsylvania and at the Franklin and Marshall Academy, Machmer was brought to Massachusetts Agricultural College in 1911 as instructor of mathematics, one of a small crop of younger faculty brought in to build the curriculum. Well regarded throughout the college and a favorite of the students, Machmer rose steadily up the academic ladder and in 1921, he was chosen by President Kenyon Butterfield to become Assistant Dean, followed four years later by his promotion to Dean.

For nearly thirty years, Machmer was centrally involved in the academic affairs of campus. Although many of the curricular innovations and reforms introduced by Butterfield were never fully realized, Machmer was a steadfast advocate of raising academic standards, and he was highly effective in dealing with the changes brought by the Great Depression, the Second World War, and the return of war veterans in the late 1940s and early 1950s, as well as the gradual shift in emphasis away from agricultural education toward the liberal arts and sciences. As a close advisor to the college president, he oversaw both the curriculum and the student body, writing that philosophically, he wished to emphasize the “development of the complete individual,” including the mental, physical, social, and moral aspects.

As Machmer grew into the Dean's role, he took part in a number of regional and national organizations and initiatives, including the federal survey of Land Grant Colleges and Universities in 1928, the Association of Land Grant Colleges and Universities, the American Conference on Academic Deans, and the Eastern Association of Deans and Advisors of Men. Although his teaching load was reduced by his administrative responsibilities, he remained active as well in the Department of Mathematics, serving as Department head from 1935-1940. Outside the University, his slate was no less full. Deeply involved in the Amherst community, he took an interest generally in educational and Congregational Church matters, heading the Parent-Teachers Association and the Amherst School Committee at various times, and working with the local Democratic Party and the Masonic fraternity.

On January 24, 1953, less than a month after retiring from the University, Machmer died of a heart attack while fighting a grass fire at his summer home at Chequesett Bluff, Wellfleet, Mass. In 1956, a new classroom building was named Machmer Hall in his honor.