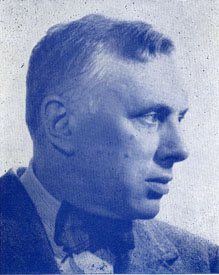 A distinguished journalist, Curator of the Nieman Foundation for Journalism at Harvard, and radio and television commentator, Louis Martin Lyons was a distinctive progressive voice in the media from the 1920s through the 1970s. Born on Sept. 1, 1897, and raised fatherless both in the suburbs of Boston and on a small farm in Plymouth County, Mass., Lyons graduated from Massachusetts Agricultural College in 1918. After military service during the First World War, he returned home intending to become a teacher, but with the assistance of a friend's connections, embarked instead on a career in journalism. Hired by the Boston Globe in 1919, and then working as editor for the MAC Extension Service and reporter for the Springfield Republican, Lyons quickly found his niche. Even at this early stage in his career, he had a nose for news and little fear of controversy. His reporting, for example, helped expose some alleged improprieties by Amherst College President Alexander Meiklejohn that led to his resignation.

In 1923, Lyons returned to the greener pastures of the Globe as a reporter, later becoming a columnist, special features writer, and, during the Second World War, war correspondent. From the mid-1930s, he was also an active member of the American Newspaper Guild, one of the first white collar unions in the country and a target for critics who thought it tinged with Communism. At the Globe, Lyons covered a broad terrain, from Lindberg's flight across the Atlantic to the Vermont floods of 1927. In perhaps the best known article of his career, in 1940, Lyons quoted then ambassador to Britain, Joseph P. Kennedy, as saying that “Democracy is finished in England. It may be here.” Although Kennedy claimed he was misquoted and, then, taken out of context, the article deepened the split between Kennedy and Roosevelt and ultimately helped precipitate the ambassador's resignation.

In 1938, Lyons was accepted into the first class of fellows at the Nieman Foundation, which had been created to assist mid-career journalists, in the words of the donor, “to promote and elevate the standards of journalism in the United States and educate persons deemed specially qualified for journalism.” When Archibald MacLeish left as Curator of the Foundation to become Librarian of Congress in the following year, Lyons was selected as his successor, leaving his responsibilities at the Globe entirely in 1946 to work full time at the Nieman. From the post-war period until 1964, he helped shape the Fellows program, diversifying its ranks to include women, non-whites, and non-Americans, and expanding its scope to include all major media.

If anything, Lyons' obligations at the Foundation seem to have spurred his productivity, while opening new avenues as a public spokesperson on journalism writing, and the role of the press. Lyons maintained an intensive schedule of lecturing and publishing, and he expanded into non-print media. When WGBH radio was founded in 1951, Lyons was tapped to do news and commentary, and when they branched out into television four years later, he became the station's first newscaster. For twenty years, his nightly radio broadcasts were also fixtures on the local scene. A forceful advocate for freedom of the press even at the height of the McCarthy era, he was recognized with the George Foster Peabody Award for reporting by a local station and the Richard Lauterbach Award for “substantial contributions in the field of civil liberties” in 1958, and was awarded the Freedom Foundation Medal in 1959 and the Elijah Parish Lovejoy Award in 1963. Lyons received honorary degrees from the University of Massachusetts, Rhode Island State College of Education, Colby College, and Harvard. Since 1981 (also 1964-1966), the Nieman Foundation has awarded its Louis M. Lyons Award annually to “honor displays of conscience and integrity by individuals, groups or institutions in communications.”

Although Lyons retired from the Nieman Foundation in 1964, he remained actively engaged in journalism. He continued his television broadcasts on shows such as Prime Time and Evening Compass until curtailed by a stroke 1975, and he served on the Board of Trustees at the University of Massachusetts from 1964 until 1971. Remarkably, a year and a half after his stroke, he returned to regular radio commentary. Louis Lyons died on April 11, 1982, leaving three sons, a daughter, and a step-daughter.