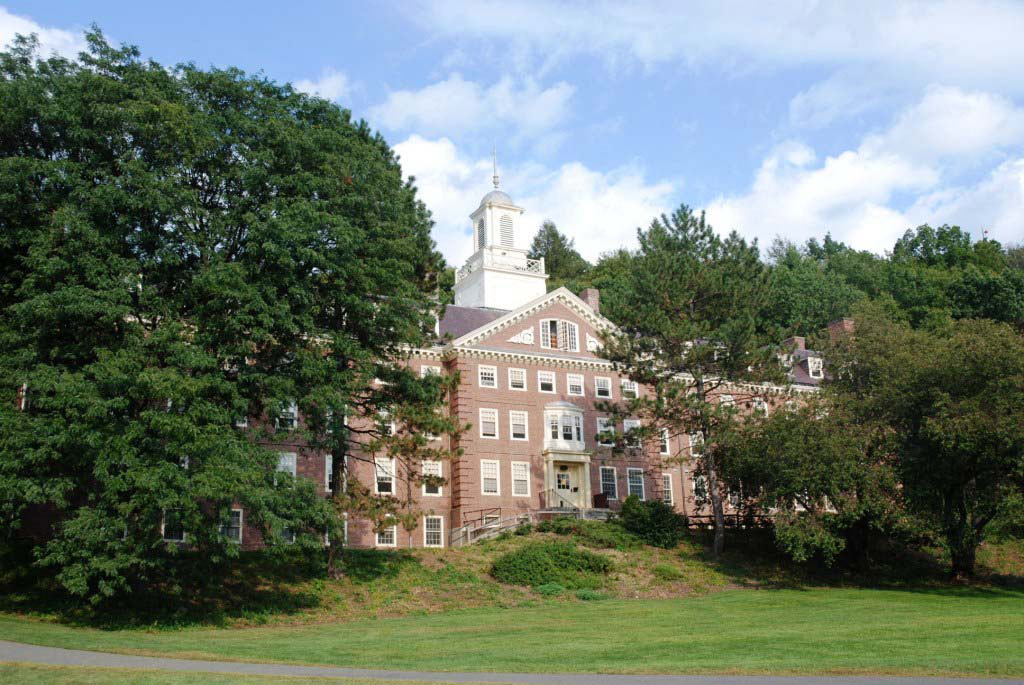 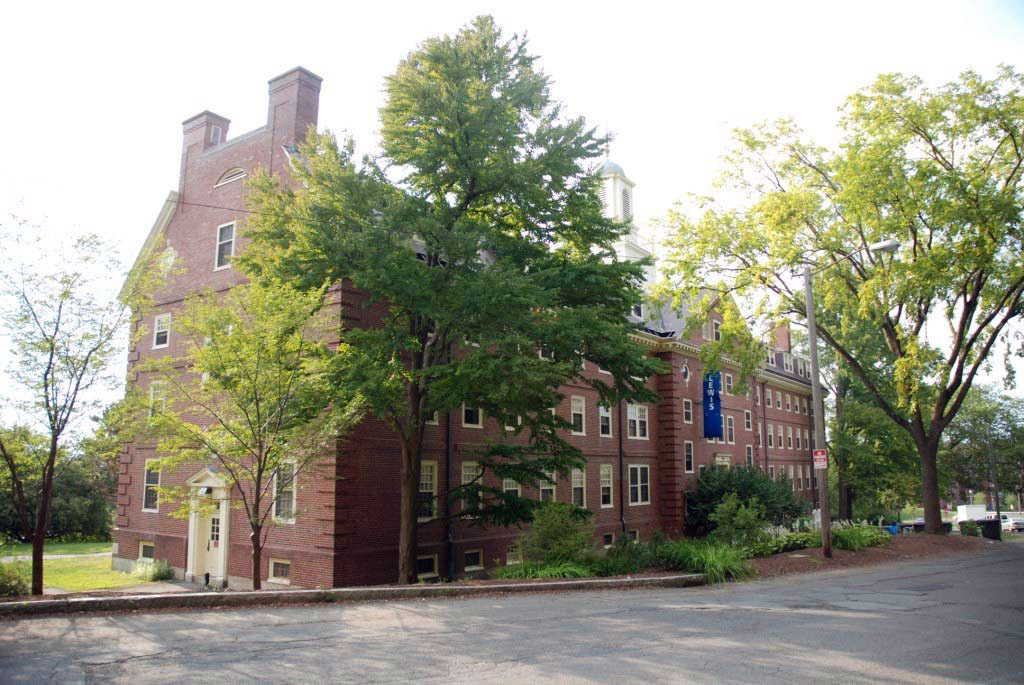 Lewis House is one of ten structures that comprise the Northeast Residential Area of the University of Massachusetts Amherst. It House is a brick neo-Georgian structure of 1940 with a central wood cupola, a slate gambrel roof with central pediments on its northeast and southwest elevations, regularly-spaced hip roof attic dormers, and paired brick interior chimneys at the northwest and southeast ends of the building. The building is 19 bays wide and three bays deep. It has decorative brick quoins at its corners, a brick water table at its basement level, and brick stringcourses. The windows are wood. Because the land slopes downward to the northwest, the central portion and southeast wing of Lewis House are 3½ stories in height, while the northeast wing has an above-grade basement that makes this portion of the building 4½ stories on both its northeast and southwest elevations. Lewis House has a wood dentil cornice at the roofline and within the gable peaks.

The 3-bay southeast end elevation has a side entrance, set at the half-flight level between the basement and first story. The entrance is sheltered within a paneled recess that has a projecting wood doorframe with pilasters and a pediment. The door has 3/3 fixed panes in its upper half and two vertical panels in its lower half. The fenestration pattern above the doorway on the southeast end elevation is set at the half-story level, including an oculus window immediately above the doorway, which indicates that staircase landings may be located behind these windows. The attic story of the southeast end wall includes two oculus windows, flanking a central 8/12 sash window, and a demilune or crescent-shape opening that contains a louvered vent.

The building’s northeast elevation facing Thatcher Way is composed of a 5-bay wide, front gable, projecting central brick portion containing the main entry, which is flanked by 7-bay wide brick wings. The main entry is at the top of a flight of concrete stairs. The window arrangement at either side of the front door suggests that the 8/8 sash windows at the outer edges of the projecting central portion (which do not align horizontally with the windows in the wings) are set at the half-story level in order to provide natural light for interior staircases that flank the entry door, while the window close to each side of the door may light the entry hall. The third story windows in these presumed staircase sections are oculus windows framed with brickwork that has concrete keystone motifs set at the top, bottom and sides of the round windows. The gable peak contains a central 8/8 sash window that has a multi-paned casement window at either side. These three gable peak windows are framed within a single flush arch that makes the three windows take on the appearance of a single Diocletian window unit. Over all, the fenestration of the east elevation consists of 12/12 sash on the first story, 8/12 on the second story, 8/8 on the third story and 8/8 in the attic dormers. The basement level has 4/2 awning windows, with 8/8 sash windows in the two bays at the northwest end of this elevation, where the basement is above ground level because of the slope of the land.

The building’s southwest elevation is likewise composed of a five-bay wide, front gable, projecting central brick portion containing the main entry, which is flanked by 7-bay wide brick wings. The main entry is at the top of a flight of brick and concrete stairs, within a slight recess that is sheltered by a shallow portico in the Roman Doric Order. The door has 3/3 fixed panes in its upper half and two vertical panels in its lower half. The portico supports a second story wooden bow window that contains a central 6/6 sash window with a 4/4 sash window at either side. The bow window has dentil moldings at its cornice and a lead-color standing-seam metal dome roof. Two 12/12 sash windows are located to either side of the portico on the first story of the projecting central portion of the building, and two 8/12 sash windows are on either side of the second-story bow window. The third story of this central portion contains six evenly spaced 8/8 sash windows. The attic gable contains an attached pair of 2/6 round arched casement windows. White painted wood scrollwork is set into the attic gable on either side of the paired windows. This decorative treatment is visually reminiscent of the east elevation attic gable of one of the most high-profile new campus buildings of the period, specifically Dunster House at Harvard University (built 1930), where the Dunster family coat of arms is flanked by similar scrollwork. Consistent with the windows on its northeast elevation, the fenestration of Lewis House’s southwest elevation consists of single windows with 12/12 sash on the first story, 8/12 on the second story, 8/8 on the third story and 8/8 in the attic dormers. The basement level has 4/2 awning windows, with 8/8 sash windows in the two bays at the northwest end of this elevation, where the basement is above ground level because of the slope of the land.

The central cupola has three wood stages: (1) a tall, square, platform with wood quoins, set on the main roof of Lewis House, (2) atop that platform is a smaller and shorter square cupola base, surrounded on all sides by a walkway with a wood fretwork railing and (3) above that base is the top part of the cupola, which has four projecting sides, each side of which has a central arched louvered opening, corner pilasters and a dentil cornice. The cupola is capped by a lead-color metal dome that has an ornate finial with a weathervane.

Lewis House is located along the west side of Thatcher Way, to the north of Thatcher House, and to the south of Johnson House on a site that slopes from the east to the west. All four sides of Lewis House are bordered by bituminous concrete pedestrian walks. The walks along both the eastern and western sides of the building include sets of concrete stairs with handrails. The site to the west side of the building consists of a steep slope with deciduous trees over ground cover. At the base of the slope is a mown lawn quadrangle with bituminous concrete pedestrian walks. The quadrangle is framed by ten buildings. To the east of Lewis House is Thatcher Way with a heavily wooded/forested area beyond. Site furnishings surrounding Lewis House include wooden benches and tables.

Historic plans indicate that Lewis House (1940) was the second building of the North residential area/quadrangle complex to be constructed, preceded by the Thatcher House (1935) to the south. In 1919, prior to construction of Lewis House, the site of the building was occupied by experimental orchards and experimental grass plots. A 1943 campus map is the first to show Lewis House completed. The landscape shown around the building consists of a street tree planning along both sides of a spur off Thatcher Way at the northeast corner of the building (vegetation no longer extant), trees at the building’s corners along the western façade (no longer extant), and walks on all four sides of the building (extant). Access from North Pleasant Street was provided by a walk that runs perpendicular from North Pleasant Street to the southwest corner of Thatcher House (extant). A c.1948 campus map shows a similar treatment of the landscape. A bituminous concrete walk was added across the mown lawn of the quadrangle to the west of Lewis House in the 1970s (extant).

A comparison of the existing conditions with historic photographs of the Lewis House indicates that landscape immediately surrounding building has changed dramatically from the time of its construction. Changes include the introduction of ground cover to the formerly grassy slope along the western façade, new mature deciduous and evergreen trees on the western slope that block formerly prominent views of the building entrance, the loss of evergreens trees and shrubs that once framed the principal building entrance on the western façade, the loss of clipped evergreen shrubs that bordered the walk on the top of the western slope, and the loss of deciduous trees at the corners of the western side of the building.