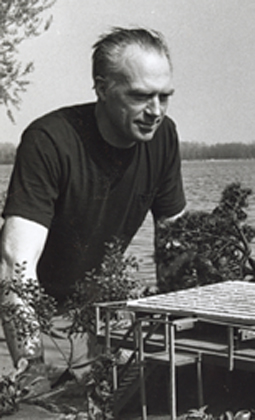 A member of the Department of Landscape Architecture and Regional Planning at the University of Massachusetts Amherst from 1970 to 1989, Barrie Barstow Greenbie (1920-1998) enjoyed a remarkably diverse career, contributing to fields ranging from art to theatre, architecture to landscape planning. Born in New York on March 29, 1920, Greenbie's early life was in many ways as diverse as his adulthood. Raised to believe that his father, Sydney, was of Swedish descent, he discovered in his forties that he actually descended from a Jewish family who had fled Russia during the pogroms of Alexander II. His mother Marjorie, scion of an old New England family, was among the first women granted a PhD from Yale and taught English at Mount Holyoke College.

Prepped at the Taft School in Watertown, Connecticut, during the height of the Great Depression, Greenbie faced a still-sluggish economy upon graduation. After studying at the Corcoran School of Art and the Art Students League, both in New York City, he earned his first job in 1940, when he earned the distinction of becoming the youngest artist ever commissioned by the Works Progress Administration, painting a mural for the post office in Dover-Foxcroft, Maine.

After service with the Field Artillery in the Pacific during the Second World War and as a correspondent with the 6th Army in occupied Japan, Greenbie returned home to continue his education at the University of Miami, studying drama with a concentration in playwriting and stage design. Following receipt of his BA in 1953, he joined the Theatre Department at Skidmore College in Saratoga, N.Y., all the while maintaining an active creative life. It was there that he first branched out into architecture, designing buildings for the college and in 1959, the widely acclaimed East 74th Street Theater in New York (later renamed the Phoenix). He later returned to school, earning a doctorate in urban affairs and regional planning from the University of Wisconsin (1972) two years after accepting a position at UMass Amherst.

The wide-ranging intellect and keen artistic talent displayed at Skidmore characterized Greenbie's professional life at every stage. Author of a raft of essays, plays, and poetry, he designed theatres for dance for the Ford Foundation, invented a new conveyor belt system, and acquired five patents for inventions such as the Portapavillion, a portable open-framed tent, and the G-Frame house, a prefabricated house design that is easy and fast to build. Among his scholarly contributions were three monographs Design for Diversity: Planning for Natural Man in the Neo-Technic Environment (1976), focused particularly on the interactions between humans and nature, Spaces: Dimensions of the Human Landscape (1981), and Space and Spirit in Modern Japan (1988). His autobiography, A Hole in the Heartland appeared in 1996. At UMass, Greenbie pursued campus projects as diverse as designing the William Smith Clark Memorial (a joint effort between UMass and Hokkaido University to honor the third President of Massachusetts Agricultural College) and conducting an extensive aerial survey of the landscapes of the Connecticut River Valley.

Greenbie died at his home in South Amherst in 1998. He was survived by his wife of thirty-four years, Vlasta J. (Koran) Greenbie, three daughters, two grandchildren, and two great-grandchildren.