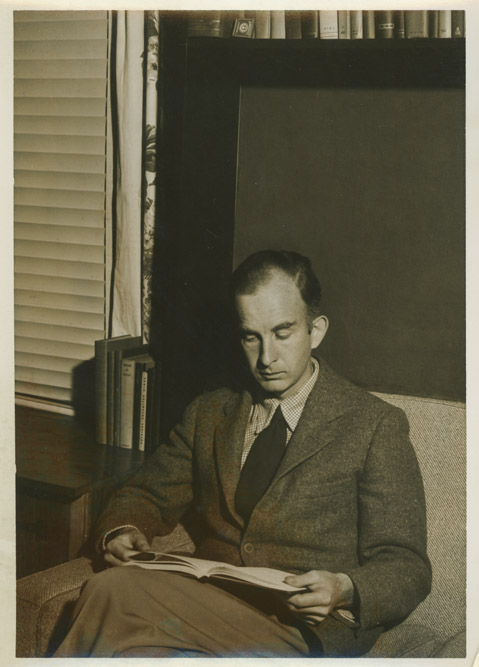 Walker W. Gibson, a professor of English at UMass Amherst from 1967 to 1987, was a passionate teacher of writing and rhetoric and author of humorous verse. Born in Jacksonville, Florida in 1919, but raised in Albany, New York, Gibson earned his B.A. from Yale in 1940 and was engaged in graduate work at Harvard until his studies were interrupted by service in the U.S. Army Air Corps during the Second World War.

After returning from the war, Gibson earned his M.A. from the University of Iowa, where he was a research assistant for the Iowa Writers Workshop. He accepted a position at Amherst College in 1948 teaching freshman English, lecturing in the Yale Summer School between 1948 and 1956. In 1957, he left Amherst to accept a position as director of freshman composition at Washington Square College of New York University.

Gibson returned to Massachusetts in 1967, joining the faculty at UMass Amherst as Professor of English and director of Freshman English. He later served as director of the Rhetoric Program (1970-1972) and director of Undergraduate Studies in English (1974-1976).

A prolific writer, Gibson contributed prose and his signature humorous verse to the New Yorker, Atlantic, Harpers, and the New York Times Magazine, among others, and published several books, including collections of verse, works on writing, teaching composition, and literary criticism. A noted educator of English teachers, Gibson ran a series of summer institutes for university and secondary school teachers, and taught at the Bread Loaf Writers Conference in 1976 and 1977. He was president of the National Council of Teachers of English in 1973, and a member of the Committee on Public Doublespeak from 1972-1990. Among other honors received during his career, Gibson was awarded a Guggenheim Fellowship in 1963-1964 and was awarded the Chancellor’s Medal in 1977 as a Chancellor’s Lecturer.

Walker Gibson retired from UMass Amherst in 1984 and died from pneumonia at the age of 90 in February 2009.