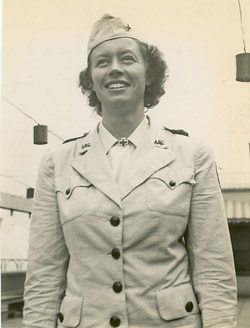 Maida Leonard Riggs (Class of 1936) taught women’s physical education at UMass before shifting to teacher preparation. A beloved member of the UMass faculty for 28 years before her retirement, Riggs was an adventurous spirit who served with the Red Cross in Europe during the Second World War and led bicycle tours there afterward. Over the years, she traveled extensively in Russia, China, Japan, Australia, New Zealand, and Uzbekistan, and at the age of 62, she trekked across Nepal.

A self-described compulsive traveler, Riggs embarked upon a more personal journey after her retirement to explore her roots. Transcribing over 250 letters by her pioneer great-grandmother, Mary Ann Clark Longley, Riggs published A Small Bit of Bread and Butter: Letters from the Dakota Territory, 1832-1869, an absorbing and sometimes heartbreaking account of life on the frontier. Her next book, Dancing in Paratrooper Boots, contains typed copies of her letters from her days as a Red Cross volunteer during the war. An avid photographer, Riggs took advantage of any opportunity to use her camera. Her images, particularly those from World War II, tell as many stories as does her correspondence.