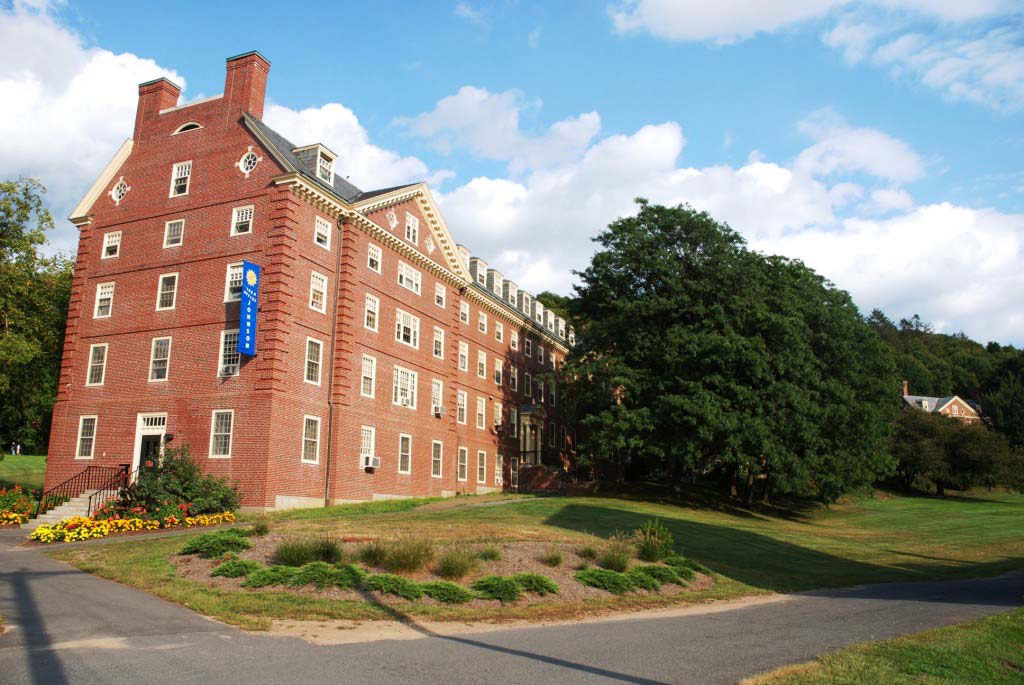 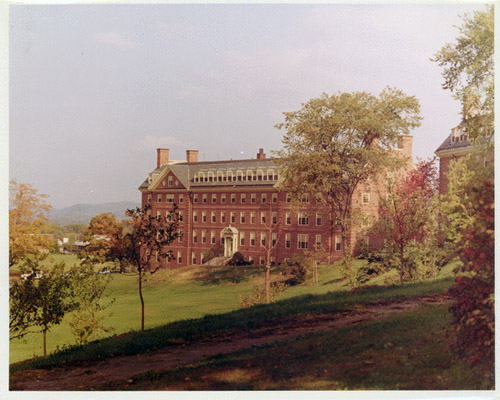 Johnson House is one of ten structures that comprise the Northeast Residential Area of the University of Massachusetts Amherst, and the last part of the quadrangle to be completed. It was built in 1959 to the design of Louis Warren Ross, the same architect who had done the first building of the quadrangle 24 years earlier.

Johnson House is a 3½ story brick neo-Georgian structure with a slate gambrel roof, regularly-spaced hip roof attic dormers with single windows, and paired brick interior chimneys at the northwest and southeast ends of the building. The building is 15 bays wide and three bays deep. It has decorative brick quoins at its corners, a brick water table at its basement level, and brick stringcourses. The windows are wood. Johnson House has a wood dentil cornice at the roofline and within the gable peaks.

The 3-bay wide northwest end elevation has a fully exposed basement, due to the slope of the land, making this end of the building 4 ½ stories. The basement level has a central door at the top of a flight of steps, with two glass panels in the door’s upper half and a 6/1 transom over the doorframe. The door has a 12/12 sash window at either side. The first, second and third stories each contain three evenly spaced sash windows, with 12/12, 8/12 and 8/8 windows, respectively. The attic story of the northwest end elevation includes two oculus windows, flanking a central 8/12 sash window, and a demilune or crescent-shape opening that contains a louvered vent.

The building’s northeast elevation facing Thatcher Way is 15 bays wide and includes two 3-bay wide, front gable, projecting brick portions, which are located near each end of the elevation, set one bay in from the south and north ends of the building. Because of the slope of the land, the part of the basement story at the northwest side of the main door is above ground. The windows in this section of the basement match the first story windows (described below), except that there is no three-part window in the basement of the pedimented projecting portion of the building.

The 7-bay wide central portion of the northeast elevation, located between these projecting sections, has a central door, which is at the top of a stairway. At either side of the door are one set of paired 12/12 windows and two evenly spaced 12/12 windows. The second and third stories each contain seven windows, consisting of three closely spaced windows at the center and two evenly spaced windows at either end of this section. The first, second and third stories have 12/12, 8/12 and 8/8 windows, respectively. The central section of the attic story has seven dormers that are aligned with the second and third story windows. The dormers have 8/8 windows. The attic story also has a matching dormer on the outer side of each of the projecting gable peaks.

The southwest elevation’s 9-bay wide central section, located between the projecting pediment sections, has a central door at the top of a stairway. The door is sheltered by a shallow portico that has Ionic columns and a segmental pediment. The door has four 12/12 windows at either side. The second and third stories each have nine evenly spaced windows that are 8/12 and 8/8, respectively. The attic has nine evenly spaced 8/8 hip roof dormer windows above the central section of this elevation and a matching single dormer in the end bays of the building.

Johnson House is located along the west side of Thatcher Way to the north of the Lewis House on a site that slopes from the east to the west. All four sides of Thatcher House are bordered by bituminous concrete pedestrian walks with sets of concrete stairs leading to the building’s entrances. The site to the west of the building consists of a slope with deciduous trees over lawn. At the base of the slope is a mown lawn quadrangle with a mixture of deciduous and evergreen trees. East of the building is Thatcher Way with a lawn area and a heavily wooded/forested area beyond.

Johnson House (1959) was the last building in the north residential area to be completed and follows in the neo-Georgian style of the earlier buildings in the complex. The siting of the building completed the eastern edge of the complex by mirroring Thatcher House to the south. The line of symmetry for the complex runs from Lewis House to Arnold House across the open quadrangle (extant). A new bituminous concrete path was added to the quadrangle leading diagonally from Crabtree House to the southern end of Johnson House after 1969. To the east, Thatcher Way retains its historic alignment, arcing along the eastern façade of the buildings that form the edge of the complex and splitting near Lewis House. A comparison of the existing conditions with historic photographs of Johnson House indicates that vegetation immediately surrounding building has changed from the time of its construction. Changes include the introduction of deciduous trees to the slope along the western façade that block formerly prominent views of the building entrance from the quadrangle below and the loss of evergreen shrubs that once framed the principal building entrance on the western façade.

Johnson House was named for Anna McQueston Johnson (1876-1954), who served as a Trustee of the Massachusetts Agricultural College/Massachusetts State College/University of Massachusetts from 1918 to 1954. She was also an author and a member of the College’s Advisory Council for Women from 1921 to 1944.