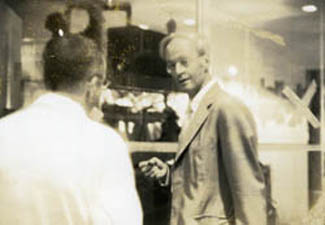 A namesake and descendant of David Rittenhouse, one of early America's preeminent physical scientists, David R. Inglis enjoyed a career in nuclear physics that ranged from theoretical work on the structure of the nucleus in the 1930s to the development of the atomic bomb in the 1940s to the protracted struggle against nuclear weaponry and nuclear power. Born in Detroit, Michigan, on October 10, 1905, Inglis graduated from Amherst College (1928) before receiving his doctorate from the University of Michigan in 1931 for a dissertation on energy relations in complex spectra.

Like many ambitious young scientists of his generation, Inglis traveled abroad to strengthen his credentials. Well versed in current issues in the field from having attended the series of symposia on theoretical physics held in Ann Arbor, Inglis spent a year in Heidelberg, immersing himself in the rapidly developing field of quantum mechanics. When he returned to the States in 1933, however, he found himself in a state of academic vagabondage, passing through a succession of faculty positions at Ohio State (where he met and married Dorothy Kerr), Pittsburgh, and Princeton before landing at Johns Hopkins in 1938. There, he devoted himself to developing a program in experimental nuclear physics while conducting significant research on the nature of spin-orbit coupling in 7Li. When later confirmed, this work is believed, as Hanna et al. (1997) report, to represent the first assignment of an excited nuclear level based on a microscopic quantum mechanical theory.

Inglis' tenure at Hopkins was interrupted by wartime service with the Ballistics Research Laboratory at Aberdeen Proving Grounds (1943) and the Manhattan Project at Los Alamos Laboratory, N.M. (1943-1946). He returned to civilian life in 1946 and to his work on atomic structure and angular distribution studies, but the war was clearly a watershed in the development of his commitment to what he called public affairs. Having gained an insider's perspective on nuclear annihilation, he gradually turned against nuclear power. Joining the Argonne National Laboratory as a senior scientist in 1949, Inglis spent two decades in the development of peaceful uses for nuclear power, but more notably, he emerged as a prominent figure in the nuclear disarmament movement. As a founding member of the Federation of American Scientists and participant in the Pugwash conferences during the 1950s and 1960s, Inglis was an prominent voice for rationality in discussions of nuclear weaponry. As early as 1951, he called for the creation of a federal agency for arms control and disarmament (not established for another nine years later), and both in congress and before the public, he lobbied steadily for nuclear disarmament and for a partial nuclear test ban (approved in 1963), and against nuclear proliferation and the development of antiballistic missiles. A series of articles he published in the Bulletin of the Atomic Scientists, Saturday Review, and the New Republic were influential in raising public awareness of the dire implications of radioactive fallout, the hydrogen bomb, and the complexities of international arms control.

After retiring from Argonne and joining the faculty in Physics at UMass Amherst in 1969, Inglis' activism expanded to include a concern with American energy policy. Calling attention to the critical problems of global dependence on fossil fuels and the dubious safety of nuclear reactors and long-term waste storage, Inglis became an advocate for alternative energy, particularly wind power, writing several books and chapters on nuclear and alternative energy. He felt a strong responsibility, as he wrote, for establishing a dialogue between scientists and the public as the best means of preserving democracy.

A highly prolific writer, Inglis contributed dozens of articles both in theoretical physics and public affairs over the course of his career, and was recipient of a number of honors and awards, including honorary degrees from Amherst College (1963) and the University of Illinois (1973), and the Leo Szilard Award for Physics in the Public Interest (1974) for his work on the social and strategic implications of nuclear energy. Inglis retired from UMass in 1975 and over the last several years of his life, continued occasionally to contribute to public debates. Inglis and his wife Betty (Dorothy) moved into the Applewood retirement community in September 1991. Betty died in 1993, followed by David died on December 3, 1995.