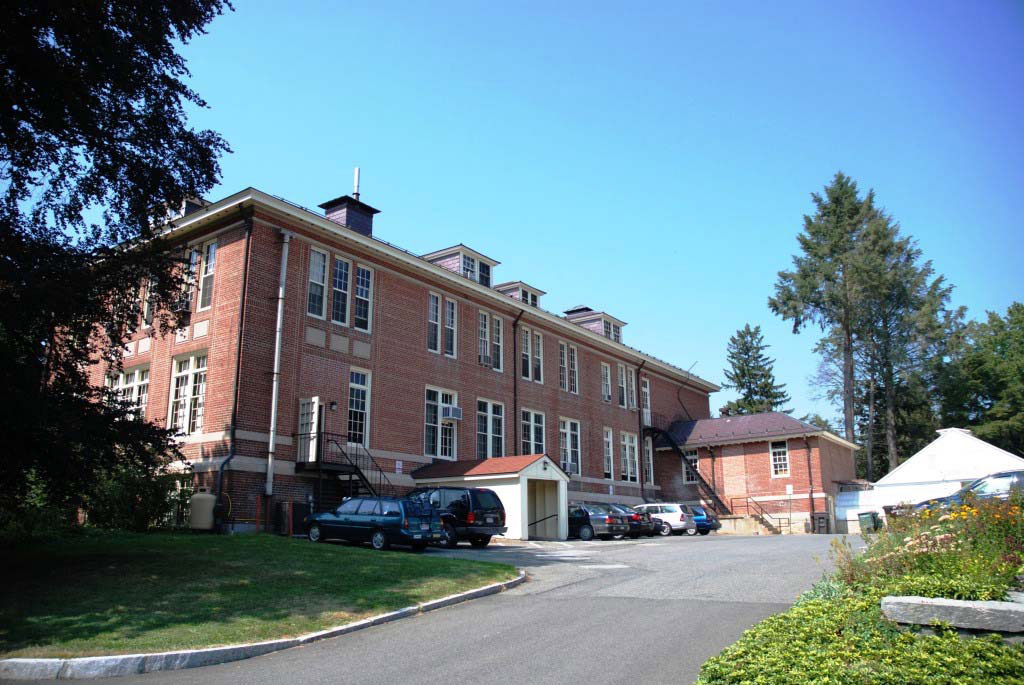 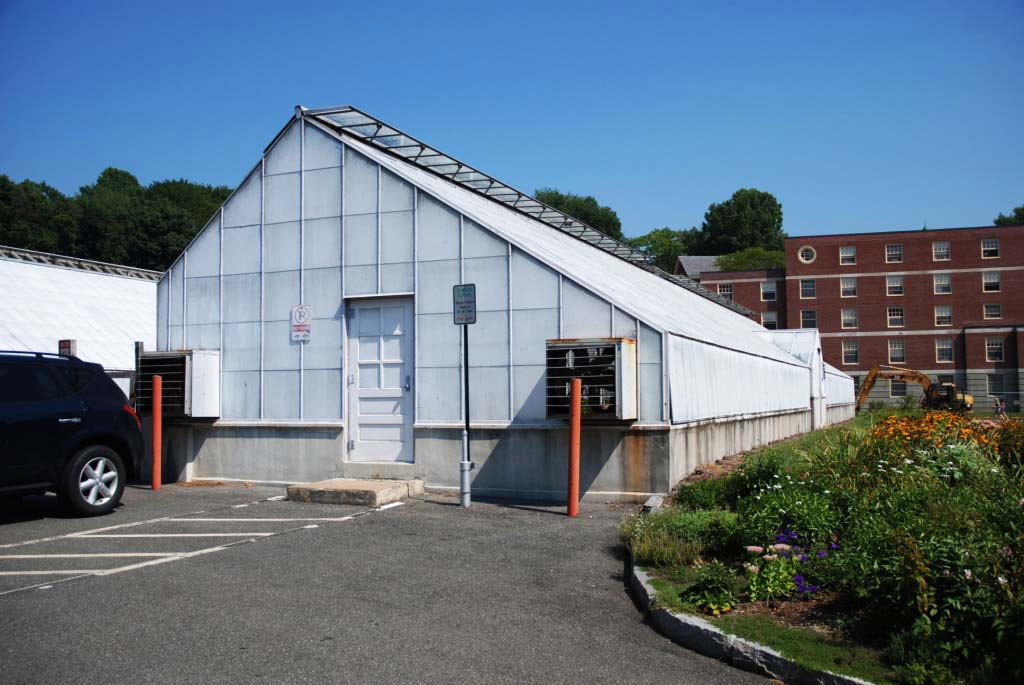 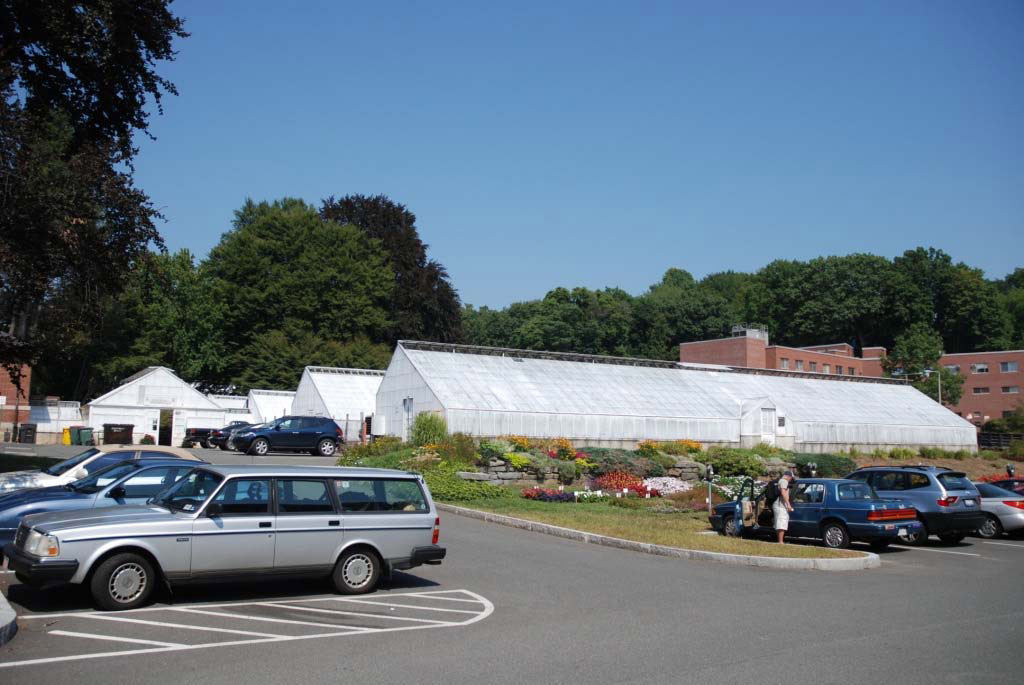 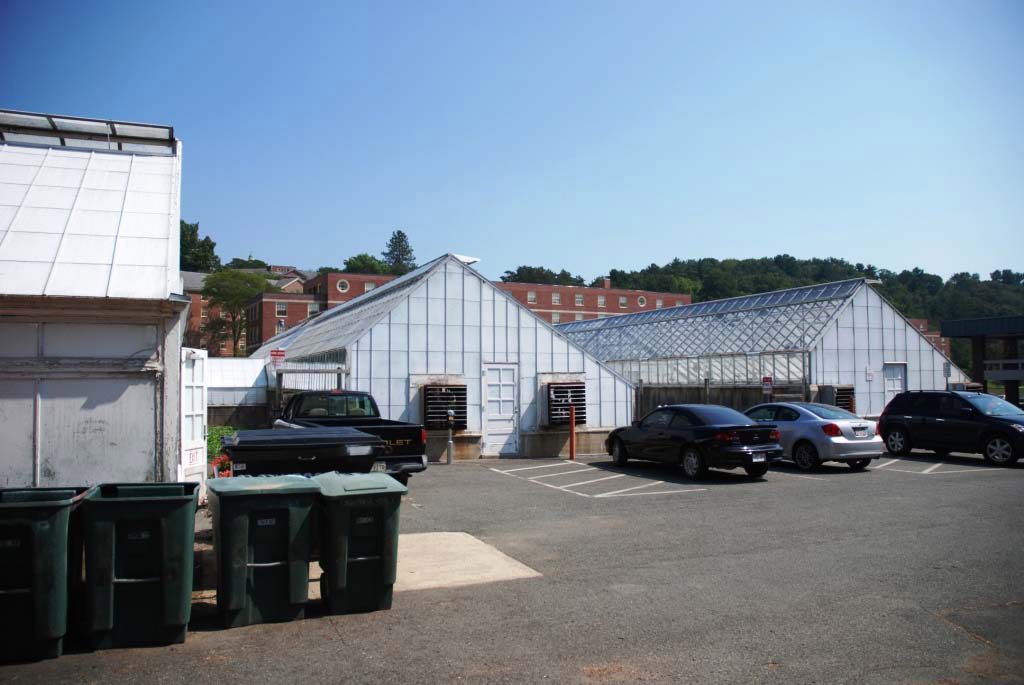 The main entry to the connected greenhouses is in the front gable main greenhouse that is connected to the east side of the brick ell. This greenhouse’s entry is in its south elevation, through a central two-leaf door that has 2/3 fixed panes in its upper half and two panels in its wood lower half. The main greenhouse had a symmetrical gable front, unlike several of the other four greenhouses that have asymmetrical gable fronts that resemble the outline of a saltbox house’s end gable. The main greenhouse was connected to French Hall and the other four greenhouses by way of short greenhouse link structures on its east and west elevations. Unfortunately, a wind storm knocked a large hemlock tree into the main greenhouse on December 30th, 2008. The building was thoroughly damaged and has since been torn down and replaced by a walkway made of plywood. The cost to replace this greenhouse was estimated at “a couple hundred thousand dollars” and it has yet to be seen when or if a new greenhouse will be erected on the old foundation.

French Hall Greenhouse is located on the west side of Thatcher Way at the intersection of Infirmary Way on a flat site. The Greenhouse is bordered by bituminous concrete parking areas with granite curbing to the south and west, and by Thatcher Way to the east. Access to the building from the parking area to the south is provided by granite steps. The landscape surrounding the building includes mature deciduous trees to the north and low evergreen shrubs, groundcover, perennial planting, and mown lawn to the east and south. The landscape also includes a stone wall.

This structure was built in conjunction with French Hall, to serve as a commercial floriculture and market gardening facility for the Massachusetts Agricultural College. These buildings, named for Henry French, first President of the College, were part of the building program planned under the leadership of President Goodell, who sought to improve the College’s research and educational facilities. The greenhouse is slated for demolition following the expansion of the Bowditch Greenhouse facilities.

The historic buildings along Stockbridge Road developed in two phases. The first phase included the construction of Homestead House, Stockbridge House, and the Durfee Plant House (no longer extant) in 1867. The second phase of development occurred from 1906-1909 and included Wilder Hall, Clark Hall, Clark Hall Greenhouse, French Hall Greenhouse, and French Hall. In 1955 the Durfee Range was added to replace the historic 1867 Durfee Plant House.

Historically, Stockbridge Street was a treelined street with a scale conducive to the integration of residential-style houses with small academic buildings. The loss of the once prominent street tree planting along Stockbridge Street has changed the character of the landscape associated with all of the buildings. New construction along the street and within the sites associates with the historic buildings has changed the scale of the area. New parking lots and associated vehicular access routes have also diminished the integrity of many of the building’s landscapes.

French Hall Greenhouse was constructed in 1908 shortly after Clark Hall and Clark Hall Greenhouse. The Greenhouses were followed by French Hall immediately to the west in 1909. Pedestrian access to the building was provided by a walk from Stockbridge Road (extant). Historic photographs show deciduous and evergreen foundation plantings and a planting bed in the lawn between Stockbridge Road and the building. A 1918 historic photograph shows crushed stone access drive leading to the southeast corner of the building, which is indicated on campus maps as late as 1955. By 1959 a parking area was added to the south of the buildings, which remains today, reduced in size. Both the size of the new parking lot and the setting for French Hall were impacted by the construction of the Franklin Dining Hall in 1965. The setting of French Hall and French Hall Greenhouse was also impacted by the construction of University Health Center (1962, addition 1973) and Brett House (1963) to the east.