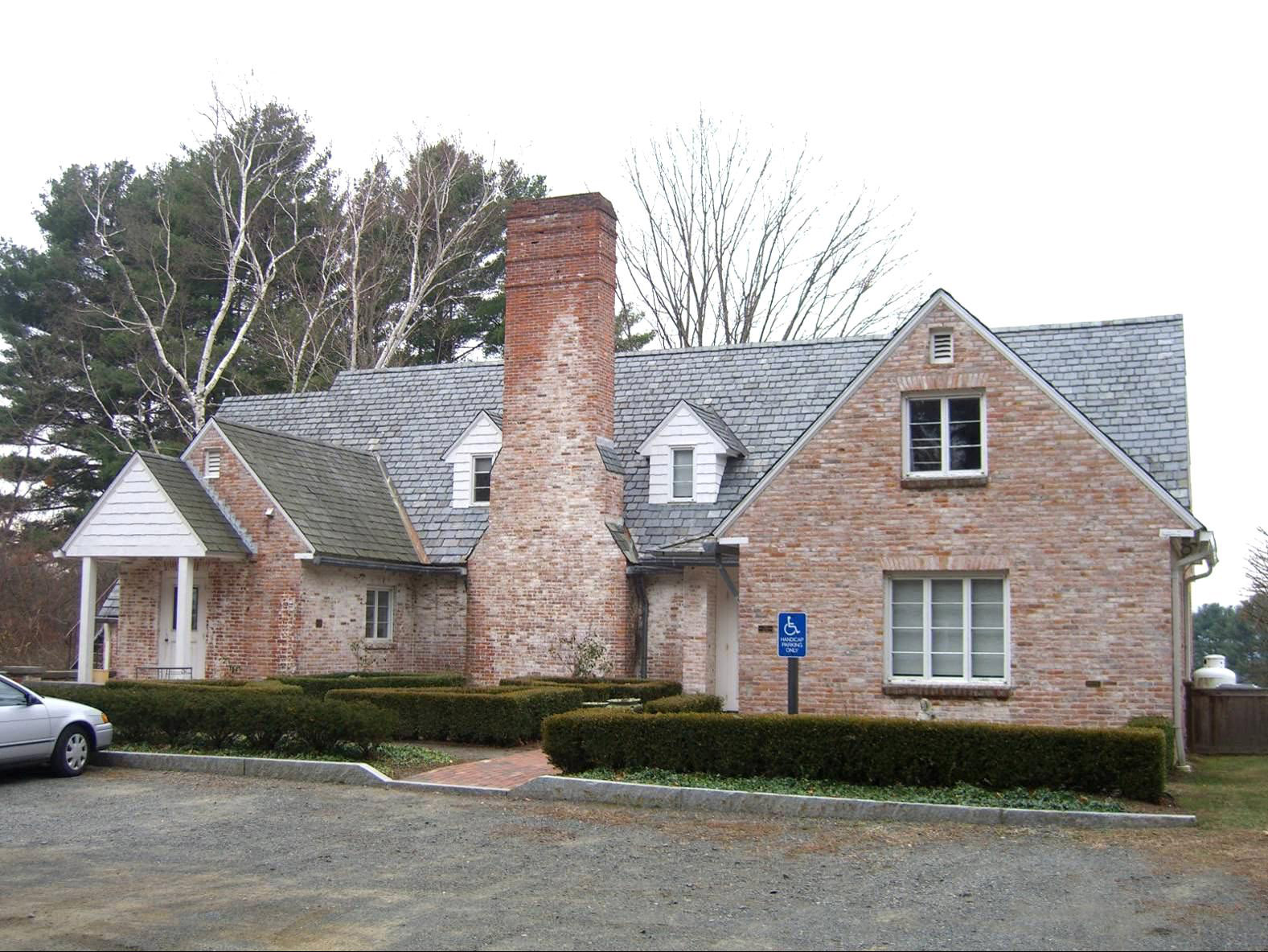 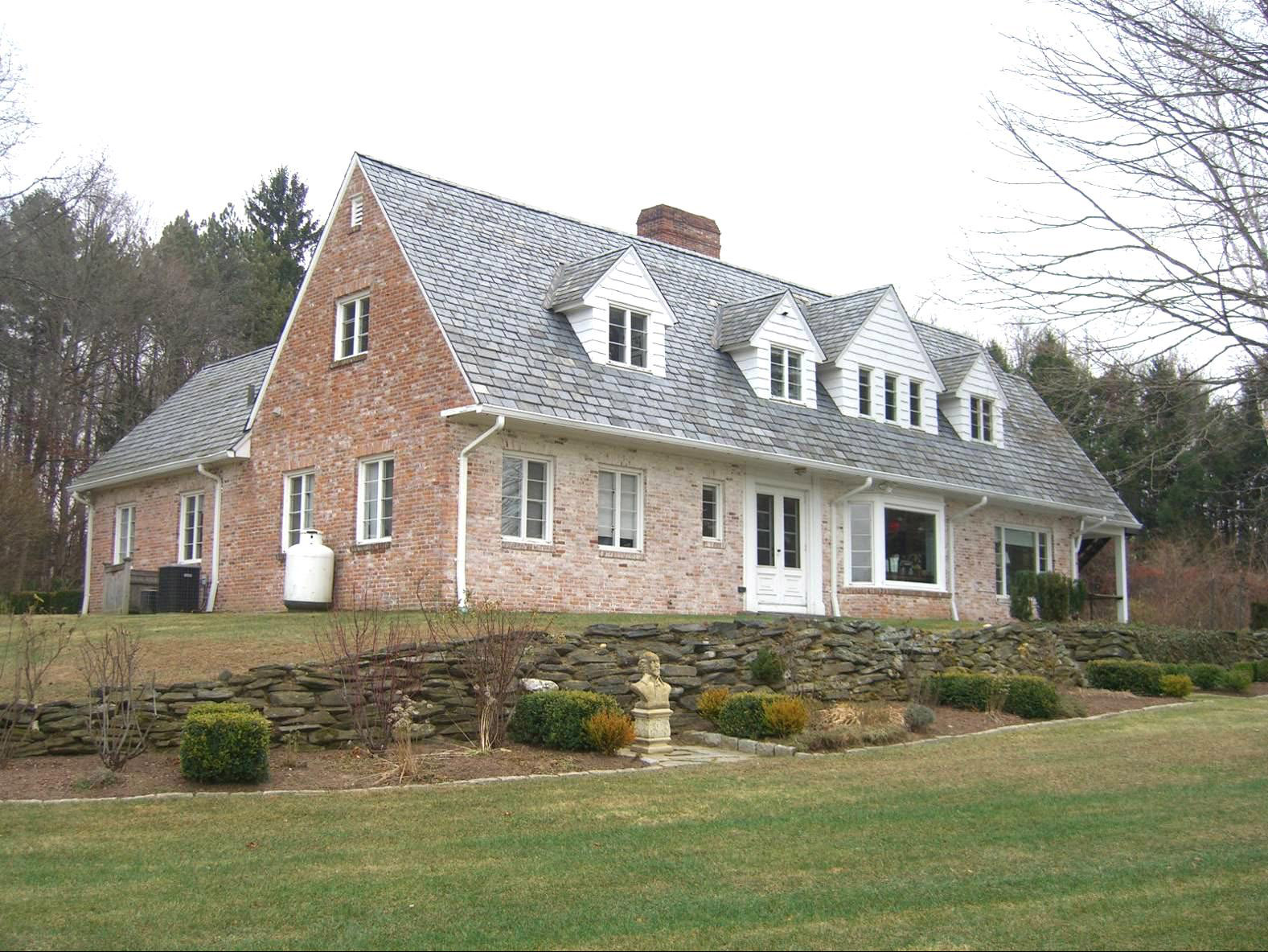 The Dakin House, Carriage House, and Garage are on the Amherst campus of the University of Massachusetts. The three structures comprise the Dakin family estate that was donated to the University and currently used as an academic research facility. The estate exists along the west side of East Pleasant Street to the north of Tillson Farm Road.

The Dakin House is an approximately 5,000 square foot former private residence. The English Cottage Style house has a C-shaped plan including one 2-story block, and two 1-story wings that form an entrance courtyard. The main block is approximately 5 bays wide by 2 bays deep with a gable roof. The wings are perpendicular to the main block and each 1 bay wide but vary in length and width. Both their gables intersect the east slope of main block gable. Between the two wings is a large brick chimney.

Two building entrances occur at the east elevation. One is at the south wing and has a small gabled porch. The second entrance is a small vestibule that projects into the courtyard from the intersection of the main block and north wing. Both entrances have single wood doors with glazed upper panels.

The house has a slate shingle roof with metal gutters and downspouts. At the south elevation of the main block, a second floor door is accessed via a metal balcony and stair. This gable end also encloses an unscreened porch.

The house landscape is defined by formal gardens and a crushed stone parking area, to the south by deciduous trees over mown lawn, to the west by garden beds and deciduous trees over mown lawn and to the north by mown lawn with one evergreen tree. A granite curb separates the crushed stone parking area from the formal gardens at the main entrance to house on the east side. The gardens consist of symmetrical clipped boxwood hedges bordering brick and crushed stone walks and a central pool. At the rear of the house, a flagstone terrace is supported by a dry-laid stone retaining wall with garden beds at its base. The retaining wall runs the entire length of the west side of the house and extends to the north, dying into the topography. The planting beds at the base of the retaining wall are bordered by granite cobblestones and the garden includes a portrait bust sculpture on pedestal.

The Carriage House and Garage are located southeast of the house. The Carriage House is an approximately 3,000 square foot, 1-½ story rectangular structure with a gabled slate roof. The north elevation is defined by two garage door bays and the east and west elevations have 5 window bays. Two attic windows and a board-and-batten door occur at the north gable. The building is masonry with a white stucco exterior finish. Windows are metal casement and the garage doors are wood paneled. All have stucco sills and headers. The center of the roof includes a square, pyramidal roof attic vent with a weather vane. The Garage is an approximately 400 square foot, 1-bay wood frame structure with wood siding and a gabled wood shingle roof. The garage bay has a distinct arched opening.

Dakin Estate and Naming of the Building

Winthrop S. Dakin (1906-1982) moved to Amherst in 1909 as a boy of three. He studied at private schools, Princeton, and Harvard University where he earned a degree in law. Toby, as he was usually called, had a law office in Northampton. He met Janet Wilder (1910-1994) while she was teaching zoology at Mount Holyoke College just before World War II.

Toby and Janet married in 1941 and moved to Amherst, but they were soon involved in the WWII effort. Toby became Chief of the International Law Branch in the Judge Advocate General’s Office in Washington, D.C. He was assigned to different cities at first, and Janet taught zoology where she could and worked in Civil Defense jobs. The couple did not have children. At the end of their military service, the Dakins returned to Amherst and began construction of their home in 1948 adjacent a 26-acre meadow.

The house was built by William E. Gass, the father of three sons who also worked building fine homes in the Amherst area. Many of Gass’s projects were composed of structures salvaged prior to the flooding of the Swift River Valley for the Quabbin Resevoir in the 1930s and 40s.Gass also worked on the early Historic Deerfield preservation properties.

Janet did not return to teaching zoology, but focused on raising and riding Morgan horses. She became a leader in Morgan Horse organizations and was Vice President of the New England Morgan Horse Association. She wrote monthly columns on the raising of her colt Jeffery Amherst or “Jeffy”, for Morgan Horse magazine columns, which were later published as a book. She began and led a popular 4H Horse Club that still exists in Amherst, and is the longest running one of its kind. She was also instrumental in supporting the construction of the University of Massachusetts Amherst Equine Center with an indoor arena. She worked with other animal lovers to organize a group of friends of stray animals, even hosting tag sales in her barn to establish what is now known as the Janet Dakin Animal Shelter for the region.

Primarily a research facility for scholars and graduate students who make use of the more than 16,000 rare books, manuscripts, and monographs, the Renaissance Center also houses graduate and undergraduate seminar rooms where courses in English, History, Art History, Theater, and Spanish are already taking place.

The meadow is routinely not mowed in early summer to permit the native bobolinks to continue to nest there during their breeding season. With funding from the Amherst Kestrel Trust (founded by the Dakins) the property also maintains a perimeter trail which runs over half a mile around the meadow.